Frank Deford, a legend in the world of sports journalism, has died at age 78 in Key West, Florida, according to his wife, Carol Penner Deford.

The Baltimore native spent 50 years writing for Sports Illustrated, but some might be more acquainted with his booming voice delivering unique takes on sports on National Public Radio. Deford also wrote 18 books, nine of them novels -- such as "Everybody's All-American" -- in a wide-ranging career.

Deford had announced his retirement from NPR after 37 years earlier this month.

SI: The Best of Frank Deford 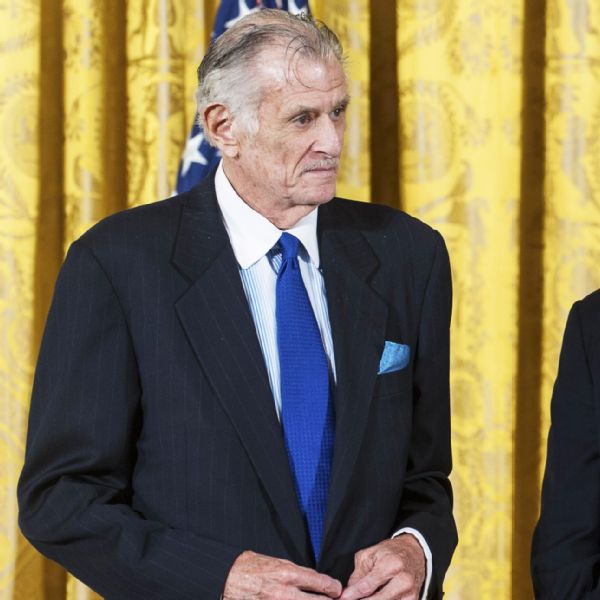 Throughout a storied career that included commentary for NPR, HBO and ESPN, several bestselling books, creating the daily sports newspaper The National and most famously writing for Sports Illustrated, Frank Deford became one of the most accomplished and authentic storytellers of his time. Our friends at SI have collected some of his greatest works.

"I have survived so long because I've been blessed with talented and gracious colleagues, and with a top brass who let me choose my topics every week and then allowed me to express opinions that were not always popular," he said. "Well, someone had to stand up to the yackety-yak soccer cult.

"And perhaps just as important, I've been blessed with you, with a broad and intelligent audience -- even if large portions thereof haven't necessarily given a hoot about sports. Nothing has pleased me so much as when someone -- usually a woman -- writes me or tells me that she's appreciated sports more because NPR allowed me to treat sports seriously, as another branch on the tree of culture."

Deford was the first sportswriter to receive the National Humanities Medal in 2013 from then-President Barack Obama, an honor the writer said he was most proud of.

"A dedicated writer and storyteller, Mr. Deford has offered a consistent, compelling voice in print and on radio, reaching beyond scores and statistics to reveal the humanity woven into the games we love," Obama said at the time.

Deford was also named to the National Association of Sportscasters and Sportswriters Hall of Fame, was voted Sportswriter of the Year six times, won a Peabody Award and an Emmy, and in 2013 was given the PEN/ESPN Lifetime Achievement Award for Literary Sports Writing.

His long profiles, covering all corners of sports, were for years a showcase in Sports Illustrated.

"He could watch the grittiest game and zoom in on the moment that made it important," AP national sports columnist Jim Litke said. "Nobody was better at connecting sports to the culture at large. He dressed up every event he attended."

He also dressed up in a more literal way, always sharply attired and cutting a debonair figure at 6-foot-4 with his shock of dark hair and thin mustache.

"I'm stunned by Frank's passing. Yes, he'd been ill, but just a week ago, he'd joked to me about finally being released from the hospital," said Bryant Gumbel, host of "Real Sports."

"In addition to being an immense talent, he was a consummate gentleman, a dear friend and a beloved, original member of our 'Real Sports' family. Frank was a giant in the world of sports. His loss is immeasurable."

Deford joined HBO Sports in 1995 and his first report chronicled life in Augusta, Georgia, outside of the Masters. It was called "The American Singapore." He delivered 119 segments for the show and was a feature reporter at Wimbledon in the 1990s. Deford also hosted HBO documentaries.

Among Deford's books were "Heart of a Champion," which chronicles the career of athletes who appeared on Wheaties boxes, and a biography of tennis great Bill Tilden.

His wit always was on display. Among Deford's gems: "I believe that professional wrestling is clean and everything else in the world is fixed."

And he understood why the games have such a hold on so many.

"To see the glory in sport, where somebody comes from behind and does something, sinks a shot in the last second or throws a touchdown pass or hits a home run, there is a beauty in that, and at the end of the day, that's why we love sports more than anything else," he said.

Deford grew up in Baltimore and graduated from Princeton.

He was editor-in-chief of The National, the nation's first sports daily that was founded in 1990 and folded the following year. Its final front page read: "We Had A Ball: The fat lady sings our song."

Deford is survived by his wife, the former model Carol Penner; two children; and two grandchildren.