In this exclusive excerpt from "Basketball: A Love Story," the icons who changed the game share the first moment the game changed them.

Earvin "Magic" Johnson (three-time NBA MVP): I fell in love with basketball watching games with my dad in the living room. I was 3 or 4 years old. Him cheering for the Philadelphia 76ers -- Wilt Chamberlain was his favorite player. I would go out and practice Wilt's ugly finger roll and try to be the Big Dipper, and ever since that moment, I just had to have a ball in my hand.

LeBron James (four-time NBA MVP): When I was 4, 5 years old, I started playing on a crate. We cut the bottom out, nailed it to the light pole, me and my friends. No backboard, so every shot had to go straight in, or you didn't make it. And I remember that joy -- playing on the street, cars interrupting our game, the ball going into the woods. Playing basketball, it did something to me.

Kevin Durant (2014 NBA MVP): My mom took me to a rec center. I walked into the gym, and it was like the gates of heaven opened up. 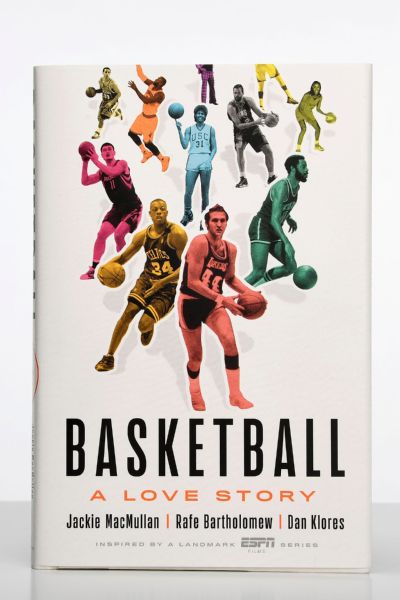 This is not just a book. (But you can buy it here.) It's based on an epic film series made up of more than 60 short stories that are now available to stream on the ESPN app and will premiere on ESPN beginning Oct. 9.

Cheryl Miller (two-time NCAA champion): I just knew there was something bigger and greater out there for me through basketball. It wasn't until 1976. I remember seeing highlights of the women's Olympic team, and for the first time, I identified with other female basketball players.

Jerry West (14-time NBA All-Star): I've always felt that the greatest thing a person can have is an imagination. When I picked that ball up, I was the referee, the timekeeper. If I missed three times in a row, I'd find a way to put a second back on the clock. When I was a little boy, I could use my imagination to be the hero of every game.

Shaquille O'Neal (2000 NBA MVP): It was a movie called "The Fish That Saved Pittsburgh." Dr. J, Julius Erving, [was] in the movie, but I didn't know he was a real person. So my father said, "Come on," and [we] jumped on the train to Madison Square Garden. I'm sitting there like, "That's the guy from the movie!" Then he goes baseline, throws it down, the crowd goes crazy. I look at my dad, I said, "That's what I want to be when I grow up."

Charles Barkley (1993 NBA MVP): I was able to make a great life at it, but the really cool thing about basketball is it kept me out of jail.

Adam Silver (NBA commissioner): I was in second grade, and I'll never forget: I shot the ball, and it went in. In terms of building character and confidence, [the] next time I ran up and down the court I was a different guy.

Rebecca Lobo (1999 WNBA All-Star): I'm in eighth grade, and I'm already 6-[foot]-2. You go to school dances, and no boy is asking the 6-[foot]-2 girl with the big perm hair to slow dance. But when I played basketball, I loved being tall. Basketball was the place where I felt good about myself.

Spencer Haywood (1970 ABA MVP): We didn't get a basketball for Christmas because my mom could not afford it. So she decided, "I'm going to make you boys a basketball," and we were like, "How are you going to make a basketball? A basketball's gotta bounce." So she made us a ball out of this croker sack, and we were allowed two bounces in our head to make the pass or make the shot. That's when I started to enjoy basketball.