We learn early in life that the world is organized into clubs. There are the ones you choose, like swim club or chess club, and the ones in which life chooses you, like cancer survivors.

When I first met then-16-year-old Finnigan Mooney for this story in August, I couldn't help but think about the club we both belonged to: the zipper club, because open-heart surgery patients have a zipper-like scar that runs down their chest.

Mooney was born with hypoplastic left heart syndrome, a congenital disability in which the left side of the heart isn't fully developed at birth. He endured his first open-heart surgery at 3 days old. Mooney has had more than 13 heart surgeries in his life, and he barely remembers any of it. My surgery took place in November 2016 to repair an aortic aneurysm. I can tell you what the operating room looked like, smelled like. And the agony that was sitting in a chair the morning after the surgery.

But it isn't just the red scars down the center of our chests that connect us. He was 10 when the Doernbecher Children's Hospital in Portland, Oregon, chose him to be part of the Nike Freestyle Program to design a pair of Nikes. They handed him a pair of SB Dunk Highs and told him to go to town. Mooney chose a bright yellow exterior with blue accents and a shiny gold swoosh. But most eye-catching of all was the red anatomical heart etched on the outside of the shoe. It wasn't some cute cartoony heart but the real deal, protruding aorta and all. 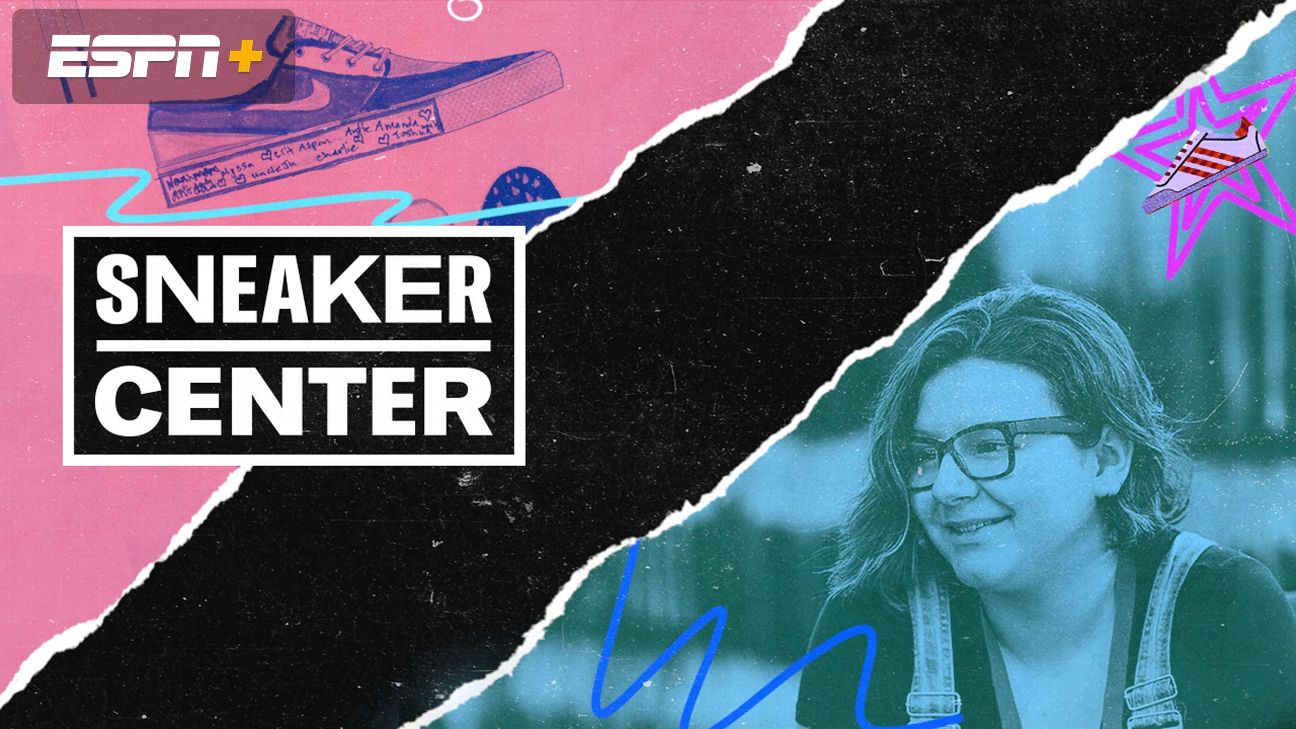 Wayne Drehs visits Doernbecher Children's Hospital in Portland, where patients with rare diseases design sneakers as part of their therapy. Teaming with Nike/Jordan Brand, the kids at Doernbecher pour their hearts into designing unique "1 of 1" shoes, which are auctioned off to raise money for the hospital. Watch on ESPN+

"I just remember he wanted it to be as real as possible," said his father, Joe Mooney.

In the days and weeks after my surgery, I became a sneakerhead. It's a long story, but to put it simply: too much free time on the couch. One impulse purchase became two, three and then four. Along the way, I stumbled into the Nike Doernbecher Freestyle Collection and one pair of shoes in particular, Mooney's 2012 SB Dunks. I had to have a pair. When they arrived, I didn't wear them but rather displayed them on a shelf in my office, showing them off to anyone who visited. Most everyone progressed through the same transformation of reactions, from "eww" to "wow."

Just like every song carries with it a different meaning to every set of ears, sneakers are the same way. Each pair tells its own story. The high-tops of a basketball player. The sparkling white walkers of a nurse. For some, sneakers are a statement of status and wealth. For others, they're an expression of style and taste. For me, Finnigan Mooney's SB Dunks told the story of hope. The magic of modern medicine. And the fine line that often exists between life and death. They were a way for me to show off that I survived.

On the afternoon I met Mooney, I was nervous. It's crazy when you think about it: a 42-year-old sportswriter who has met Michael Jordan and Michael Phelps and hung with Lindsey Vonn, Tiger Woods and Lewis Hamilton being nervous about meeting a soft-spoken 16-year-old high schooler. We went to a park near his home to shoot hoops. We were both awful. We barely got through a game of P-I-G and in the interest of time -- and our sanity -- tweaked our game of one-on-one to first basket wins. But who won wasn't important.

It was about sharing our stories and talking about Mooney's shoes. Spending some time together, and letting Mooney know that his creation meant the world to surely not only me but to so many other open-heart surgery patients.