Wakeboarder Dallas Friday spoke with reporter Morty Ain about what it was like to take it all off for the Body Issue and how her past with gymnastics has helped her wakeboarding.

It's cool to be recognized as someone who's really upped the level of women's wakeboarding. I'm really aggressive with my twist on things. I like to go from doing a simple trick and really make it massive and explosive. I love the fact that you can take a simple flip and make it your own, put your own little flair to it. That was something in the women's field you didn't see a whole lot of. So to come in and have that influence on women's riders has really pushed our sport into what it is today -- a full field of girls really pushing themselves and taking the sport to the next level.

I'm not done until I say I'm done. I just won the first contest of this year, even after 16 years wakeboarding. I still have that fire and I'm ready to learn more.

I was an explosive gymnast. My favorite was the vault and the floor. It's a super disciplined sport, and we were taught to be the best that we can be -- so I transferred that to wakeboarding. Already having that air awareness, body strength, mobility and flexibility -- that's what really made me able to win the X Games the following year [2001] and be the best.

I'm a handstand fanatic. I can pretty much do anything on my hands. I can walk on my hands anywhere, everywhere, all day long. 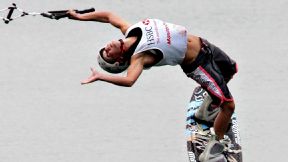 I'm not very coordinated on my feet. I know, it might be hard to believe.

I was built like a little powerhouse. When I was transferring from gymnastics to wakeboarding, I was a little self-conscious. There's not a huge difference going from a leotard to a bathing suit, but you'd see these beautiful girls in bikinis, and I'm only 13 or 14 years old with this buff little body. I grew into being really proud of it, knowing that that's what has enabled me to do what I do.

If you were a genie, I'd probably have you make me 5-6. It'd be nice to have that little extra height. But God blessed me with this body for a reason.

I did 26 pullups last year. That's pretty impressive. I always like to brag around the boys because I know most of them can't do that. Maybe they can do 20. Yep 26.

I used to put [my older brother] on my back and see how many times I could run around the house until I dropped him. He was way bigger than me, but I thrive off that! Growing up with two older brothers, I was super competitive. They definitely toughened me up, especially in wakeboarding. When I first got out there it was like, "Oh, we're going to leave you in the middle of the lake with the alligators unless you try a backflip." And I'm like, "What? No!" Then, of course, I'd end up trying a backflip.

Anything is possible if I'm willing to take that extra step outside my comfort zone.

The best thing about being young is you don't have to think. Going into contests, you realize there's a lot on the line. But when you're younger you don't feel that pressure. You're just out there doing what you were born to do. That's what I miss most about those younger days -- it wasn't really a thought process, it was just a feel.

"I'm not very coordinated on my feet. I know, it might be hard to believe." Dallas Friday

I love boxing. I'm fascinated with one-on-one work. It's the hitting aspect, it's a competition. Just doing combinations with someone else, it really pushes me. I'm going to keep my defenses up and protect myself.

I make everything so competitive, even day-to-day things. This is going to sound weird, but even at competitions, just moving around and getting stretched out, I have to show that I'm in it to win it and really go the extra mile, grab my jump rope and seem ready to go an hour before competition.

My leg looked like a soft taco. I was in Singapore, it was my last trick, second pass on a whirlybird, and I just came down -- one of those freak accidents and my leg just bent in half when I landed. I broke my femur in nine places. When I went to the hospital there were some complications, both of my lungs collapsed. It was a little touch and go for a bit. I was in a coma for over a week I think.

I've been through some pretty devastating traumas. Honestly, the worst injury I've gone through was my 2010 blow in Fort Worth. I actually ended up winning my heat, but my last trick on my pass I blew my ACL, MCL, PCL, meniscus and patellar tendon. It just felt like a chain reaction of one ligament exploding to the next. That was the toughest thing to go through because of the rehab. When I broke my femur it was, "I'm coming back from this, no doubt." But with the knee, there were so many bumps in the road that I wasn't ready for. There was a point where I actually questioned myself: "Am I ever going to come back from this?"

We make the insane and unreasonable become possible. That's what action sports are all about; we put our bodies on the line. That's what makes it so cool; we go out there and it doesn't matter the risk or what the outcome might be. There is nothing better than proving people wrong. It's just a feeling that all of us athletes live for -- that moment when we defy what everyone said is not possible.