Skateboarder Leticia Bufoni spoke with reporter Morty Ain about what it was like to take it all off for ESPN The Magazine's Body Issue and how her love for lunges increases her collection of shorts.

Not a lot of girls skate street. Skating stairs and rails, it hurts a lot. Also, in street skating, we don't wear any protection. I think it's even scarier if you're wearing a helmet and knee pads because that would hold you back. I am afraid of getting hurt, but I love skating street so much that I go for it, you know?

My dad broke my board so I wouldn't skate anymore. I started when I was 9 years old; I was skating with all the guys in my neighborhood, and he was mad at me because I was the only girl in the middle of 10 guys. He smashed my board in front of me and said, "You're not skating anymore, ever again." But he only broke the wood, so after a day I changed the board and used the track and wheels. When he saw that he was like, "Well, there's nothing I can do. I'm going to have to let her skate." After a year, my dad finally took me to a contest and started supporting me. 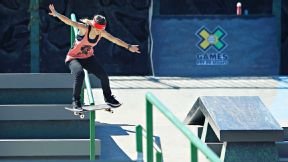 "If you make this trick, I will let you stay [in America]." This was after the X Games when I was about 14. It was an ollie inward heel flip. I finally landed the trick, and my dad said, "Yeah, you can stay now." He let me stay here [in the States] with my friends.

I skate every day, but I don't work out every day. When I'm doing contests I don't really work out because I don't like to get sore before a contest. I work out more when I'm home. I do a lot of personal training, so it's a lot of core stuff and leg stuff. I like doing squats and lunges.

Yeah, I'll show my legs off, I wear shorts all the time.

I never lift weights. I don't want to get big. If you want to skate well and be fast you can't be big, you know? I use more of my body weight [when I train].

I see things I want to skate on all the time. When I'm driving, I'm always looking at stuff. Sometimes I'll see big stairs or a big rail, and I will just tell myself, "I can do that; I want to give that a try." I like to push myself to the limit, you know?

I once did an ollie down 16 or 17 stairs. That was the most dangerous one. Right now, there's this rail in Los Angeles that I want to try, but I'm just scared. It's 16 stairs and a really tall rail. I can really hurt myself on that.

"You need surgery as soon as possible." Two years ago, I was street skating and I rolled my ankle and I tore my ligaments. That was the worst -- half my foot was on the skateboard and half was off. I couldn't skate for like a month.

"Not a lot of girls skate street. Skating stairs and rails, it hurts a lot. Also, in street skating, we don't wear any protection." Leticia Bufoni

I love skating so much, I can't stop. Even if I'm hurt and I can't skate, in my head I'm always like, "I need to get back on my board." I go crazy.

I go skydiving all the time. I'll try to go, like, once a week. I'll do five or six jumps in one day.

I have a group of friends with Harleys, and we all ride together. But it's really hard to do tricks on a Harley-Davidson because it's so big, so I have a dirt bike and I do some wheelies and some jumps on that.

I'm going to skate forever. Professionally, I don't know, maybe I'll skate professionally until I'm 40. But I see myself really old and still skating around. Like skating bowls and mini ramps.