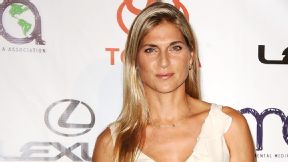 My knees are my teachers. Injuries make you better because you figure out the ways to improve, to get around them, change things up to fix it.

My doctor says my knees are 75. My doctor won't even bring my MRI into the room when he comes to see me. It's from jumping -- jumping lots and lots of times.

I really like that, overall, when someone sees me, I probably look like I have some vitality. I know people that are much older than I am that are loaded with vitality, and I know people much younger than me that are not. For me, it's a very powerful measure.

In college I was modeling in New York, and I worked with the most beautiful women in the world. They were so beautiful you could barely look at them. And then I would go back to my team at Florida State, and we were all trying to get as big as we could because we wanted to be as strong as possible. And they seemed more confident and happier. I thought: "Being perfectly beautiful -- or what's defined by the standards of the world as beautiful -- doesn't actually make you happier."

"My knees are my teachers. Injuries make you better because you figure out the ways to improve, to get around them, change things up to fix it." Gabby Reece

They joke that the worst torture device ever created was a chair. Sitting in that short position, it's not good for you. And when you're tall like me, you are even more vulnerable because your body gets tighter. So every chance I get, I sit on the floor or use a foam roller while watching TV. I even have a mini trampoline in my living room. My 7-year-old is on that more than everybody, but I'll jump on the trampoline while watching TV.

Laird is kind of a freak. Of any athlete I've ever seen, his strength, cardio, endurance and flexibility combination is very, very unusual -- and his ability to deal with discomfort. If you and I went on a bike ride, I would say, "Where are we going?" Because I'm moderating, I need to find energy. Laird wouldn't even ask because he's not worried about discomfort.

I'm like a sloth compared to Laird. It's really f---ing annoying, actually, after a while. But it's good, because it inspires me; it's that constant reminder that I could be a little better. I look at him, and he's just blazing down his own path. He's constantly learning.

This isn't a career, this is a lifestyle. I train in some capacity all year-round. And that's not just working out; that's your lifestyle -- how you eat, how you sleep, just all of those things that go into a more holistic approach to wellness.

The only way I can really tell that I'm getting older is because my kids get bigger. At a certain point, getting old is really a decision that people make. It's not really something that happens to you other than your hair gets gray and your skin gets a little wrinkly. Aging is a mindset.

I think an athlete's greatest problem is retaining the enthusiasm. When you do something for a certain amount of time, pretty soon you just get tired of it. The body can just be a physical representation of a mental state. 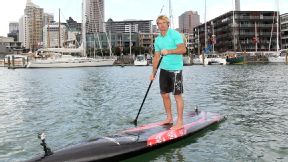 My body still works. I like that part. That, and I can recover. I've had broken eardrums, punctured cheeks, broken nose, split lips, cut neck, broken shoulder, broken collarbones, broken ribs, compressed vertebrae, hip stuff, probably over 1,000 stitches, seven broken ankles, broken arches, fractures and punctures in both hands, dislocated elbow -- it keeps going and going. But I've been pretty good about not getting my face too smashed up.

Pain's my friend. Pain is a place that I live. I deal with it through ice and breathing. If you do any kind of yoga or any kind of intense stretching, you just start to become friends with it.

What's overdoing it? There's no such thing. My friends and I paddled every channel in the state of Hawaii and biked every island -- we call that the Hawaiian 5.0 -- that was almost 500 miles in five days. And the last channel was a 22-hour paddle. That was pretty brutal. My friend has done the Ironman 10 times, and he's said that for him, that was four Ironmans in a row.

Gabby is an amazing woman. I appreciate her more and more every day. It's nice to be with a woman who understands an athlete and is an athlete, who has the discipline and the work ethic, but then she's not trying to compete with you. I really appreciate that.

Gabby and I meet in the water. We both gravitate toward there, and that's the spot where we are the most comfortable.

I'm also constantly doing something new. I've moved on to another aspect of the sport [stand-up paddleboarding]. It's more like an artist; I was an impressionist at one point, and now I'm doing sculptures.

"Pain's my friend. Pain is a place that I live." Laird Hamilton

I have a fascination with hurricanes. I've been in one of the strongest hurricanes that ever hit land, and I've flown into Hurricane Ivan with the Hurricane Hunters in Biloxi. I would like to go near the source and use the energy to ride a wave. That would be an experience that I'd really enjoy.

The ability to wait your whole life for a wave, that takes patience. The fact that I've survived this long -- my mom was glad I made it to 16. I'm still here doing what I'm doing, that's really the accomplishment.

Gabby and I are all about the doing. At the end of the day, our bodies are a reflection of a lot of work over a long period of time. There's no secret: You've got to put in the effort.