United States rugby captain Todd Clever spoke with reporter Morty Ain about what it was like to take it all off for ESPN The Magazine's Body Issue, his aversion to football and the future of his sport.

There's a lot of weight on your shoulders as a captain. In rugby, the coach's job ends on Thursday, then it's the team led by the captain. The playcallers are making the decisions throughout the game. The coach may say a few things at halftime, but other than that, he's a spectator.

Rugby is the most team sport you can have. You're playing offense and defense, you're on both sides of the line; you need to know the game plan on both sides of the ball. Some games are more physical than others, but it's a contact sport and there aren't any pads. It lasts 80 minutes. It takes a lot out of you.

This concussion risk is very low compared to American football. In any contact sport there is a risk, but there are a couple of rules of the tackle that make the injury rate really plummet. You can't tackle around the neck or head. When you first start playing, the tackle technique and the rules of rugby make it so that it's more of a tackle than a collison or crash. There are no head-high hits.

[My coaches] still want me to put on another 10 to 15 pounds. I'm at 228 pounds now. It's hard for me to be that size, even though I eat a lot and train a lot. If it were up to me, I wouldn't even jump on the scale. If I'm fit enough to play that 80 minutes and feel physically ready, that should be enough. 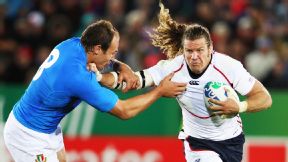 This is an exciting time to be a part of rugby. It's one of the fastest-growing team sports in the nation. But we have the same challenges as soccer: It's a continuous sport, there are no timeouts, so sponsorship is going to be really tough. There are no commercial breaks. It's hard for it to become mainstream. Also, there are 100 different rules. It's completely different than all other sports. But once people get the hang of it and watch it live, that's when they really enjoy it.

My biggest challenge is keeping weight on. I've always struggled with my legs; they've always been pretty skinny compared to some of the competition that I go against. Five days a week I'm eating five meals a day and snacking, I'm making those Costco runs, stocking up on salmon and chicken. I had a few years where I was just eating everything, but nothing was sticking to my bones. I was pretty scrawny.

One of the most important things is making sure all those little muscles are tightening up. There's those things like grabbing 2-pound dumbbells and working on your shoulder rotator cuff, or doing little exercises from your wrists or for your ankles to really build the little muscles and strengthen the ligaments. If you put that extra time in with the bands or body-weight stuff, it really does pay off.

The biggest thing for me is: Don't disappoint your teammates. Whatever it is, whether it's training or playing, you don't want to let them down.

I dragged a Volkswagen Beetle for about 20 yards. It was with my buddies at a gym in D.C., just doing some resistance stuff. It was a little bit of an uphill slope too.

"I once dragged a Volkswagen Beetle for about 20 yards. It was a little bit of an uphill slope, too." Todd Clever

You don't have to be on a machine in a gym. You can make it fun; you can make working out social. There are dozens of things [me and my friends] have tried where we thought better of it after the first time -- like grabbing a keg and throwing it as far as we can, and ending up chipping some city stairs. Then you feel really bad, like, "Yeah, let's not do that again." There are others like that, but I might end up getting myself in trouble.

Don't stay in a comfort zone. One of the biggest gambles I took was putting all my eggs in one basket with rugby. When I was 22 years old, the decision was either to stay at university [University of Nevada, Reno] and continue to play rugby and see where it goes with the national team, or, if I want to get better, I have to train with the best and play with the best. I uprooted everything and left school and moved to New Zealand. I had the hunger and sacrificed by leaving my family, girlfriend, school, friends, my entire comfort zone.

You look in the mirror and think, "Is this worth it? Putting in all this effort?" The answer is, it always is.

At a high level with rugby, the training doesn't increase, it just gets smarter. That's when the results start setting in. Some teams and coaches still have the old mindset of "more is better." You really have to self-police yourself. It's like fingerprints, everybody's a little bit different. The same concept applies to bodies -- you just have to find your recipe, that balance of training and nutrients.

I've gotten calls from two different NFL teams about being a crossover athlete. In 2007 or 2008, we had the Rugby Sevens here in San Diego, a national tournament -- that's when I met a good friend who is now an NFL agent. He took me to some workouts. It was flattering, but I didn't entertain it too much just because of how much I was enjoying rugby and how much I was enjoying traveling and representing the USA.

I'm excited for life after rugby. I'm in a good space, especially with rugby growing so fast in America. I'm happy to leave rugby in a better place than when I came in.