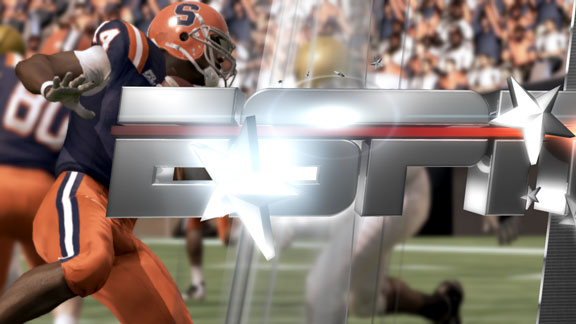 When I posted my interview with Tim Tebow about "NCAA Football 11," one picture in particular caught every die-hard gamer's attention. Forget the shots of Tebow yelling into the camera or diving for the ball, it was the picture I took of the cover boy playing an early build of the game that might have been the most telling, and definitely created the most buzz.

Was that game clock part of some new ESPN presentation in the game?

Who would've thought one picture with a game being played in the distance would start the hype rolling for what has become the most anticipated new presentation offerings in "NCAA Football 11."

"That picture got everyone talking," says Greg Heddlesten, one of the designers of the new game. "I don't know if they zoomed in or Crime Scene Investigated the photo or what, but after you posted your interview, people knew right away that there was new ESPN presentation in the game.

"We've had the ESPN license for so long, but we've only really dabbled with what we could do with ESPN in our game before. We would have the news ticker and the radio updates if you went online, but we never went beyond that. So now, we're really taking ESPN to the next level in 'NCAA Football 11' and trying to inject it everywhere."

Adds Heddlesten: "All of this adds a fresh coat of paint to 'NCAA Football 11' and really brings a cool new vibe to the franchise that we haven't had before. We wanted to add everything from the sound to the graphics so that you feel like you're participating in an actual broadcast, not just playing a video game."