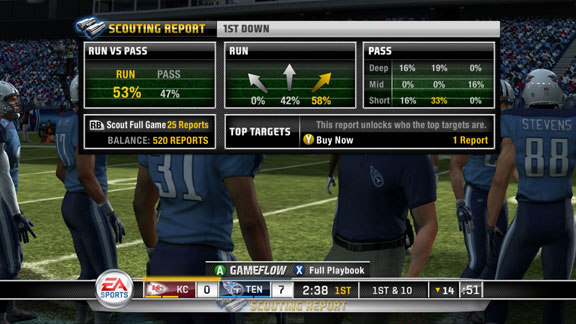 EA SportsOnline scouting reports will let you know your opponents better than they know themselves.

I like to throw the curl route on first down in "Madden." Prefer to throw it to the receiver on the right side of the screen. I have the timing down so perfect in my head that I can usually do it without looking. Eight yards to open the drive.

And it's funny -- I know my tendencies and a couple of my best friends know what I've been up to for years, but when I go online and play random people, that curl route is still always open.

But not for long.

With "Madden NFL 11," EA Sports is tracking your every play in order to deliver scouting reports to your online opponents. So now, whether I'm playing against a "Madden" vet in Sacramento or a newbie in Denver, all they need to do is order up my report and they'll know my tendencies as well as the people I've been playing "Madden" against since high school.

"Online scouting tracks all of your play calling and what you like to do in different situations," producer Donny Moore says. "We're tracking every online game that you play: online ranked, unranked and 'Madden Ultimate Team' head-to-head."

The final thing gamers unlock on defense is the player-specific target: Who does your opponent like to throw to or hand the ball off to in these certain situations.

"On offense, you're going to be scouting the percentages on how often your opponent likes to play man or zone versus the blitz in certain situations," Moore says. "The other thing you're able to unlock on offense is to view your own tendencies. This adds to that chess match where you can see that on third down and short, you actually run the ball 87 percent of the time, and during those runs, I'm running to the left 68 percent of the time. So now that I know what I do, I'm actually going to flip my play and run to the right because my opponent might scout me and know what I'm doing."

So now, not only will my opponent know about my curl route on first down, but I'm reminded of that fact myself, leading me to change my game plan and maybe call a draw or even an out and up to catch my opponent off guard. Says Moore: "By changing your game plan, it's actually making you a better player." 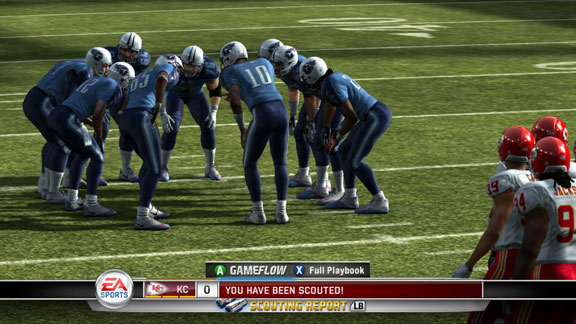 EA SportsWith one message, you know the chess match is on.

But how do you unlock these scouting reports? "Madden" producer Phil Frazier provides the details: "Scouting is a consumable. So you earn coins in every online game that you play as long as you don't quit or disconnect. You can then spend these coins on scouting reports or other things within the game [gamers also will be able to use real money to buy coin packs or scouting packs, but the prices are not final]. It's the same economy that drives 'Madden Ultimate Team.' So you can literally be playing 'Madden Ultimate Team' online, earn some coins, then turn around and either buy a pack of cards or a scouting pack. The economy drives a lot more this year than just 'Madden Ultimate Team,' but we're not talking dollars per scouting report here. You're earning these coins by playing 'Madden' online, so this isn't a money-grab for us. This is about building up your online skills. We're trying to provide a competitive advantage and we're presenting it to you in a way that's authentic to the sport of football."

And to give gamers a taste of the strategy, everybody who buys the game new will receive 50 free scouting reports with purchase tied to the new EA Sports Online Pass initiative.

"When you total everything up, there are 45 different pieces of scouting report information that you could buy per game," Moore says. "Or you can just buy the full game purchase option before the game for just 25 coins so you can just have all the scouting before the game without having to buy every piece of information separately. It's a pretty good discount. Then when you're in-game, if a scouting report is available to be viewed, you just hit a button to activate."

Adds Frazier: "What ultimately drove this feature was the hard-core, competitive, head-to-head gamer who wanted the ability, just like NFL coaches, to have a tool to understand what their opponents are doing. And that's why we've focused this feature on online head-to-head and not carried it over to online franchise, which we feel is a more social aspect of gaming."

As for how the new scouting works with "Madden's" GameFlow play-calling system? Frazier believes the two work hand in hand. "With GameFlow, you're giving the A.I. the ability to choose for you, so maybe the statistic of pass versus run isn't as valid as the others, but even when a pass play is called, it's up to you on how to execute that play," he says. "When we call out the primary receiver who is running a streak route, you can choose instead to throw to the receiver on the other side of the field who is running the corner route. So the information on where the play is run, who is favorite target is, how deep he likes to throw, all of that information is very much relevant even though the play was called by GameFlow. And since you can also audible out of GameFlow, we're also tracking those plays that you're calling. There's no way to circumvent the system, as we're tracking the final result." 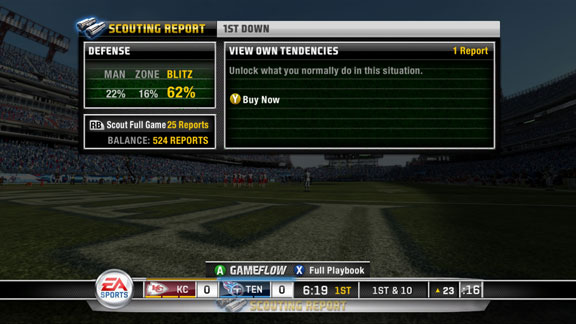 EA SportsViewing your own tendencies will help make you a better playcaller.

In addition, Moore sees the advantage coming from how online opponents like to constantly change playbooks. "The computer doesn't change his playbook, but online, gamers are always adapting," he says.

"And just because you have the information on what your opponent likes to do, that doesn't mean he's going to do it. It's just some great, useful information that could help you gain that edge in your game. And it's cool, because when someone is scouting you, a pop-up appears on your screen that reads, 'You've been scouted.' So you know when somebody is watching you and it gets back into that chess game where he thinks you're going left, so you throw a deep ball to the right when he's least expecting it. But to me, the scouting I find most useful is field location. This lets you know if a guy likes to throw those screens and drag routes across the middle or if he likes to throw deep more often."

"I agree," Frazier adds. "I was playing a game against ['Madden' producer] Ian Cummings the other day, and when I play defense, I like to play safety, and the scouting enables me to cheat a little one way or the other. But at the same time, Ian was using his own scouting to target places on the field he doesn't usually throw to because he knew I was cheating my safety deep. It really added an extra element to the game play.

"We have high hopes for this feature because of this. Now if you're being shut down, it's not because of your stick skills. It's because you're not calling a good game. You won't be able to get away with calling the same plays over and over anymore. It's geared to make the average Joe play a more serious game of football and call the game more like a real coach."

And that's what playing "Madden" is all about.