Five things to know about 'NHL 11' 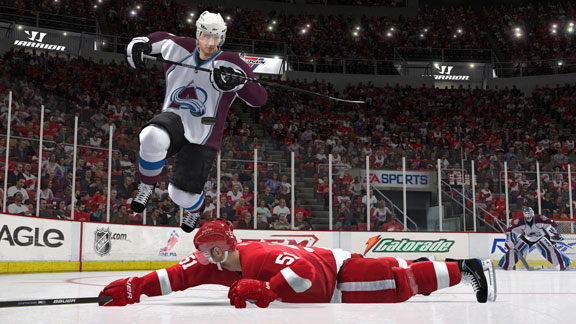 EA SportsSick of defenders on the ice? Jump over them in "NHL 11."

Over the last three years, EA Sports' "NHL" franchise has won 22 Sports Game of the Year awards from various publications.

So to the game's creative director, David Littman, it doesn't even matter that this year the game faces no direct hockey game competition on the Xbox 360 or PlayStation 3 (2K Sports is only making "NHL 2K11" for the Wii). "Our competition has always been games like 'FIFA' and 'MLB: The Show,'" he explains. "We're not only trying to make the best hockey game out there, we're trying to make the best sports game period.

"That's how we approach the 'NHL' franchise every year. For us, it's not about the hockey category, it's about growing the sport and winning more Sports Game of the Year awards because that means that we're among the best sports games in the world and that's our goal."

So what does the team at EA Sports have planned for the "11" version of their game?

I recently caught up with producer Sean Ramjagsingh to break down the five biggest gameplay improvements hockey heads should expect when the game drops September 7.

Hockey influenced by a boxing game? That's right, as according to Ramjagsingh, when gamers hit the open ice with "NHL 11's" new real-time physics engine, the old adage "went to a fight and a hockey game broke out" will take on new meaning.

"We saw the success that 'Fight Night: Round 4' had implementing the physics into their gameplay and the emerging organic gameplay it represented, really making every fight open-ended. We saw that and knew that's what we wanted for 'NHL 11,'" explains Ramjagsingh. "So we took one of the lead physics producers from 'Fight Night' and brought him over to our game and he's been working day and night getting this real-time physics engine into 'NHL 11.' And the great thing for us, when you think physics and hockey, most people think hits right away, and that's certainly a part of it, but it's really a foundation for all of our gameplay. I'm talking stick on stick contact, stick on puck, the way the puck hits the boards, and even the way the puck hits off the goalie and how if it hits off his chest protector, it's going to react different than when it hits off his pads."

But it's not like they forgot about the hits either as 'NHL 11' will introduce a new hit stick into the game where players can aim to hit their opponents either high or low. "Creatively, the results are amazing," adds Ramjagsingh. "Every hit looks different now because you can hit high or low and with the physics, now you have the chance where the guy goes over you. You can hit a guy into the boards, you can clip a guy and get knee-on-knee collision, and every one is different. We're really, really moving away from the confines of animation now. In 'NHL 10,' if you hit a guy and got a big hit, within minutes, somebody else playing the game would see the exact same hit. In 'NHL 11' you're going to create hits in the game that potentially, nobody else will ever see again."