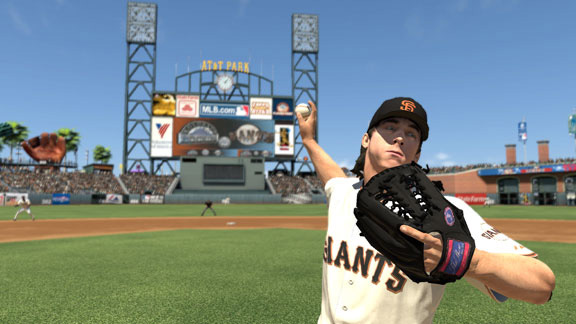 SonyIn "MLB 11: The Show", Tim Lincecum will be pitching to you in 3D.

If you ever wondered what it would be like to see some major league high heat headed straight at your dome, the creators of "MLB 11: The Show" are working on just the game you've been looking (ducking) for as when the title ships next year, it will debut in 3D.

Sony announced the 3D addition to "The Show" at this week's E3 video game convention, where the team's community manager, Ramone Russell, helped break down what gamers will experience.

"When you're standing in the batter's box, we want you to look out and feel like that outfield wall is over 350 feet away," he explains. "It's all about adding that depth of field. But the most important thing for us, in terms of gameplay, is pitch recognition. We want you to see that slider break as it flies toward the screen. We want you to see that high fastball speeding towards you. This will really add another dimension to the game, and that was our focus. It's all about getting those pitch breaks in and the depth of field in the stadiums."