'NBA Elite 11' to include free downloadable version of 'NBA Jam' 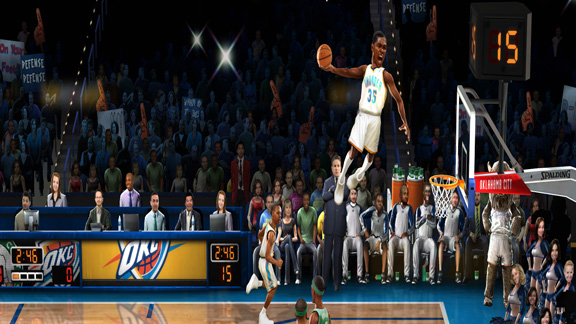 EA Sports"NBA Jam" will be a free download for those who buy "NBA Elite 11".

When EA Sports announced the resurrection of the "NBA Jam" franchise back in January as a Wii-exclusive title, Nintendo fans celebrated with shouts of "Boom-Shackalacka" while PlayStation 3 and Xbox 360 gamers were left shaking their heads in disbelief.

Why wouldn't EA Sports bring one of the most popular gaming franchises of all time to the systems of choice for so many gamers?

Turns out, "NBA Jam" will be coming to the Xbox 360 and PlayStation 3 after all, but not in the way anyone was expecting. In an unprecedented move, EA Sports is packing a free, one-time-only download code for "Jam" in every copy of "NBA Elite 11," giving basketball fans two games for just $59.99 when the titles launch on Oct. 5.

Included in the downloadable version of "NBA Jam" will be three game modes -- Play Now, Classic Campaign and Online (up to four players) -- meaning that the new Remix Tour featuring boss battles against legends like Magic Johnson is now exclusive to the Wii version of the game.