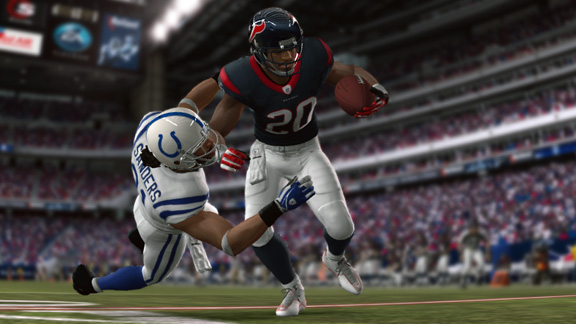 EA SportsAccording to the "Madden NFL 11" sim, the Texans are headed to the playoffs.

Heading to Vegas any time soon? Take notes, as EA Sports has been on a roll of late with sports simulations. Before the Stanley Cup playoffs, "NHL 10" predicted a Blackhawks victory. Before the World Cup, "2010 FIFA World Cup South Africa" simulated a win for Spain. So how does "Madden NFL 11" see the upcoming football season playing out?

EA Sports provided ESPN with an exclusive first look inside its simulation, and if you're a fan of Aaron Rodgers and the Green Bay Packers, get ready for a wild ride.

According to "Madden", Rodgers will win both the offensive player of the year and MVP awards after throwing for a league-high 4,639 yards and 36 touchdowns while leading the Packers to a division-best 12-4 record.

Matt Schaub of the Texans also has a huge season, not only leading the AFC in passing yards and touchdowns, but helping Houston finally make its way into the playoffs with a mark of 9-7.

Other season highlights include Brandon Marshall catching 105 passes in his first season with the Dolphins, Chris Johnson rushing for a league-high 1,784 yards, and the Ravens and Colts tying for most wins at 13.

And while EA Sports took Brett Favre off the Vikings for its sim, when I ran a simulation of my own using an advanced copy of the game, the Vikings actually finished with the same 9-7 record whether Favre played or not, as Favre led the NFL in interceptions in my sim, costing his team some big games down the stretch.

Another thing to note is that EA Sports sent over only the simulation for the season, meaning no prediction for a Super Bowl winner. But I went ahead and simulated the season and postseason three different times, and got the same result all three times (the first time this has happened for me). According to my sims, the Patriots and Packers end up in the Super Bowl with the Patriots coming out on top in a high-scoring thriller thanks to the late-game heroics of Tom Brady. 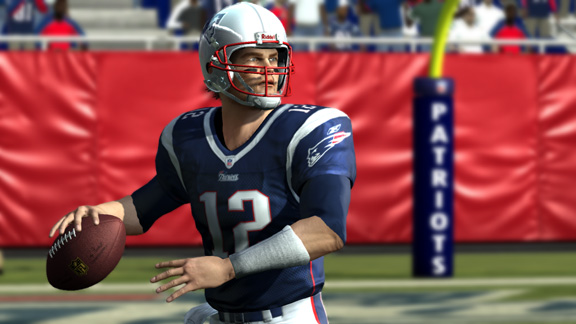 EA SportsIf "Madden 11" is right, look for Brady to win another Super Bowl this season.

Sounds like another crazy season to look forward to in the NFL.

Here are all the league standings and stat leaders according to the official "Madden NFL 11" simulation.