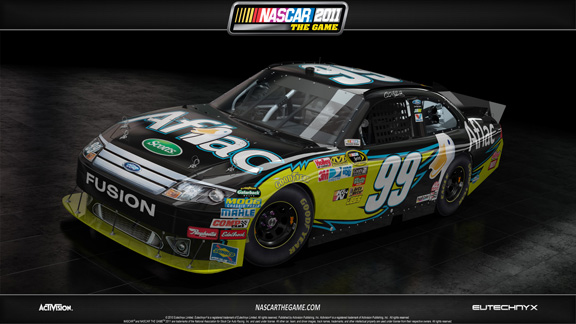 It has been two years since the last NASCAR sim on the Xbox 360 and PlayStation 3. And since EA Sports and NASCAR parted ways, rumors of NASCAR's future in gaming have consisted of everything from the NASCAR gaming license dying out completely to NASCAR signing on with a publisher such as Activision to try to one-up the deal it had with EA. Would we ever see another sim, or would NASCAR's presence in video games be relegated to a side attraction in titles such as "Gran Turismo" and "Days of Thunder"?

In reality, NASCAR has signed an exclusive new multiyear, multigame deal, but it chose video game developer Eutechnyx -- creator of "Big Mutha Truckers" and "Ferrari Challenge" -- to sign the deal with, not a publisher such as EA or Activision. Activision is involved, but it is acting as the distributor for Eutechnyx's game, "NASCAR The Game 2011."

This is a key distinction, enabling NASCAR to be more hands-on with the game's development thanks to partnering with a company that specializes in creating racing games, rather than signing blindly with Activision for the sole sake of dollar signs and letting the publisher decide who develops the franchise.

"If you go back in time, in 1994, Papyrus released 'NASCAR Racing,' the original NASCAR game … Papyrus was a developer," explains Ed Martin, Eutechnyx's executive vice president, North America, as I get him on the phone to talk about his upcoming game. "The very first time the license went out, it was a developer doing it. The industry has obviously changed quite a bit since then, but giving the license to a developer really puts us in a unique situation. We just had the guys from NASCAR out at our studio in the UK, and it was really cool to have them in the midst of development working with the guys on the Victory Lane animation and working with the guy doing the fly-over sequence and working with the guy who is tweaking and tuning the A.I. for Dale Earnhardt Jr. so it actually drives and reacts like him.

"They really got excited about this because this isn't some big publisher using some anonymous external developer. We are out there with these guys. We are working with not only NASCAR but the drivers and the R&D center and the engine builders, and everyone is really excited about the fact that we are right there with them. Eutechnyx owns the license, we're developing the game, and it's a dynamic partnership with Activision. They've been great to work with."

Here's what else Martin had to say about the new game, scheduled to hit stores in February, in ESPN's exclusive interview.

Jon Robinson: What's the direction of the new NASCAR game under development for the PS3, 360 and Wii?

Ed Martin: I don't want to get too much into the history of the license because we want to focus on the new game, but the history is important. I started at EA back in 2001. "NASCAR 2001" was really floundering, so we moved the development to Florida (EA Tiburon) and the game became the "NASCAR Thunder" series. EA did very well with it, then the last thing I did when I was with EA was actually get the exclusive deal with NASCAR that ran from 2003 to 2009. As time went on, EA, quite frankly, lost interest in NASCAR. They had the exclusive license, so they no longer needed to put all their resources into it. They outsourced everything, and the game languished. They put out their "NASCAR Kart" game in 2009, but the last real title they shipped was "NASCAR 09" back in 2008.

Now it has been a couple of years, and it gave the NASCAR license time to refresh. When we picked it up, we sat back and thought about what NASCAR fans wanted and thought about what had worked in the past. Things that have worked very well is anytime you really get into the pageantry and the passion of the sport. To a bunch of outsiders, it's just a bunch of guys driving in circles for 500 miles, but there really is just so much more to it when you dive deeper into that pageantry and that passion. You also really need to get into the personalities of the drivers. People want to go out and race as Dale Earnhardt Jr. and drive like Dale Earnhardt Jr. But mostly, you need to get into the passion and deliver something that is more approachable. There are tens of millions of NASCAR fans, and plenty of them have video game systems. So how come NASCAR video games haven't penetrated that market as far as an NHL game or a baseball game? We really believe that's because the games haven't been approachable.