'Fight Night Champion': To the penitentiary and beyond 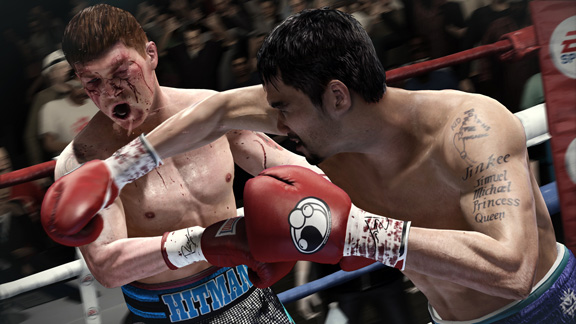 When I heard "Fight Night Champion" was going to be EA Sports' first M-rated video game, I figured they were just going to play up the blood and gore factor of the sport.

What I didn't expect was the game to start out in prison.

That's right, prison (and it has nothing to do with Mike Tyson being in the game).

But when I sat down to view a clip of the new Champion story mode last week at an EA media event, that's exactly where I found the game's lead character. There he was, boxing in prison, hands wrapped but no gloves, ring surrounded by other prisoners cheering and shouting (no visible shanking), while dressed in their orange jumpers.

Then between rounds, it didn't take long for my cut-man in the corner to drop F-bomb after F-bomb, even referring to my white opponent as a "cracker."

Not what I expected at all.

"Essentially what we wanted to do with Champion mode necessitated this being an M-rated game," explains producer Brian Hayes. "It's a story with mature themes. Not topless mature themes, but it's gritty. Being an unlicensed sports product and being in the world of boxing where there is a lot of stuff going on ... if you're going to tell a story about boxing, it's not going to be, 'Hey, I just got an e-mail from your rival and he's really upset.' There are a lot of fighters who we drew inspiration from, and they've been through some real mature experiences. So we laid out our vision for Champion mode and we said, if we do this, there's no way this can be T.

"Then some of the ancillary benefits were, great, now we can finally do real damage in gameplay. It no longer needs to be softened up. But the catalyst for it all was that we wanted a new Champion mode, and we didn't want to sugarcoat it at all. And if we weren't going to water it down, it had to be mature."

A move that Hayes knows will shock a lot of consumers.

"I think people will be surprised, but I also think they're going to be excited," adds Hayes. "I've been working on the mode for over a year now and I'm still excited about it. 'Fight Night' has never had an M-rating, EA Sports has never had an M-rated game, so we're in a unique position of being one of the only sports games to be able to do it because we don't need to run anything by David Stern or whoever.

"It's up to us, and as long as our boxers are cool with it, we can take the story where it needs to go."

And it's a story EA will reveal more about in the coming months as "Fight Night Champion" isn't scheduled to be released until March. 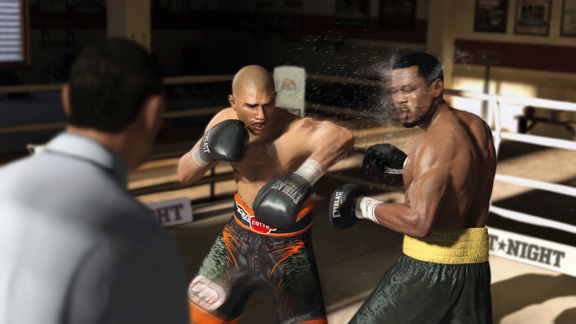 EA SportsShane Mosley gets the "sugar" knocked out of him.

Until then, I was able to get my hands on the game and box a round against another journalist, and I have to say, the graphics are not only stunning in their bloody-boxer glory, but the gameplay has been enhanced and fine-tuned with some much-needed tweaks to the control scheme making the gameplay feel much smoother and more intuitive than years past.

One of the biggest changes to the franchise is the way blocking is handled. There is a new blocking mechanic called Reflexive Blocking. "I call it that because there are two types of reflexes involved: mine and my boxer's," explains Hayes. "My reflexes come into play when I see a punch coming or when I think a punch is coming and I pull the right trigger to block. If I respond in enough time, my boxer will put his hands in the right position and block the punch. The other option I have is to just hold down the block button to cover up. Depending on my boxer's reflex rating, he will move his hands to pickoff punches with varying levels of success depending on the types of punches being thrown and his current level of stamina."

And since there is no longer a directional mechanic involved in blocking (you no longer have to choose high or low), the right analog stick and/or the buttons are still available for punching, enabling gamers to hold down the right trigger to block, flick the stick to throw a punch, then go right back to blocking. "This just offers another strategy aspect and enables you to fight like Winky Wright, picking your shots," adds Hayes. "Now I can punch from the guard, and if I time the block correctly, I can get in a bigger counter shot. And since you no longer have to let go of guard, we don't have to do the video game-thing of slowing your opponent down to clue you into throwing a punch. Now it's up to you to counter in real time, so the gameplay action is much more realistically paced." 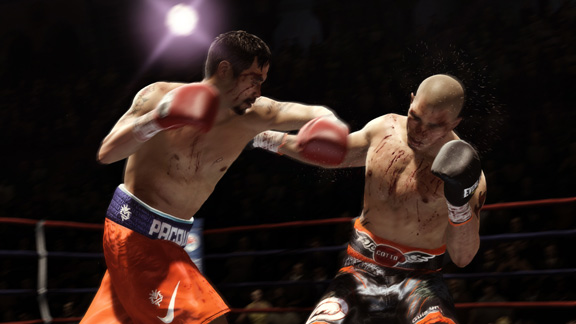 EA SportsNew punch controls make it easier to throw punches with the right or left.

"Under the hood, we have also added individual stamina meters for right arm, left arm, torso, and legs, so now if you keep throwing the same punches or if you keep throwing punches with the same arm, that arm will become tired. It's no longer about, you throw a bunch of punches and your legs are tired and you can't move. Now your arm will be tired, but you will still be able to move around the ring in a realistic manner. All of these things help us manage more realistically what a fighter can and cannot do during a fight."

Another big difference in gameplay is the new way punches are thrown using the right analog stick. It's no longer about pushing the stick in various motions in order to throw specific punches. Now it's all about simply flicking the stick -- a system EA refers to as Full Spectrum Punching. "We have to come up with a name for everything," laughs Hayes as he demonstrates the new controls. "But when we did our research from last year, we noticed that with Total Punch Control, there was an overwhelming number of left-handed punches being thrown." The reason, Hayes explains, is all in the thumb. "The thumb wasn't a fan of Total Control Punching. To throw a right-handed punch, you had to jam your thumb back toward the rest of your hand. But to throw a left hook or a left uppercut, you had more torque and it was way easier to throw left-handed punches. So for this game, we said forget the arcing gestures for hooks and uppercuts that people were accustomed to. Now every punch is thrown by simply flicking the right stick either to the left or to the right, with each angle from top to bottom representing a different punch. Now we have an analog punching system that is not only more user-friendly, but now has over twice as many punch animations than Total Punch Control could offer. We go from hooks to straights to uppercuts with punches in between." 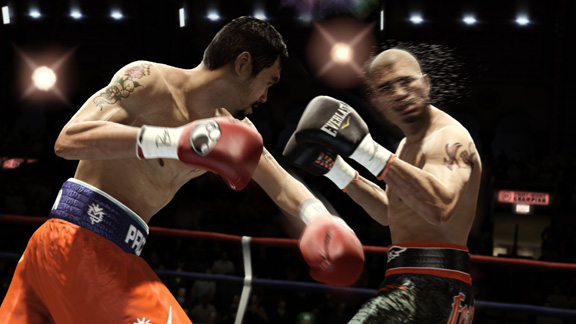 EA SportsThis is what you would call a "heavy" left hand.

Also new this year is the elimination of the haymaker punch. "We don't have any over-the-top punch animations that in real life no boxer would throw because he'd get knocked on his ass," laughs Hayes. "What we do have is a modifier button that changes your punches from normal punches to heavy punches."

And not only are heavy punches thrown with more steam, they can be applied to any punch you throw, from a jab to a hook. Certain fighters even have unique animations tied to these heavy punches, so now, a Mike Tyson uppercut will finally look as devastating as it once did in real life.

Adds Hayes: "Heavy punches take a little more stamina and take a little longer to reach their target, but it's no longer about winding up for this haymaker that your opponent sees coming from a mile away." 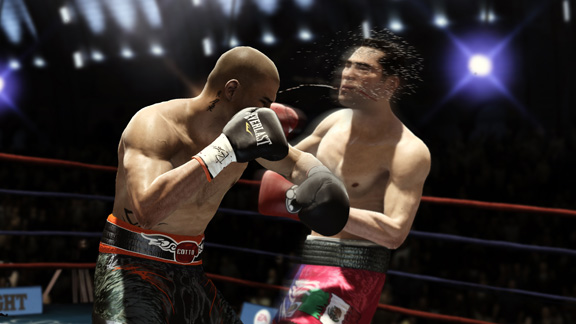 EA SportsThe graphic violence of the sport has never been so stunning.

And to go along with the heavy punches, "Fight Night" even added one-punch knockouts to the franchise. It could be the first punch of the first round or even a last second punch in the final round, but you will see the one-punch KO where the boxer who is floored won't even have the opportunity to get up. The ref won't even count. "'Fight Night' was always about the health meter, getting it to zero, and knocking your opponent down," says Hayes. "You always had a chance to get up. But now if you hit the right shot at the right time, it's over."

Tied to these one-punch knockouts are new ratings that equate to not only boxer skill, but athleticism. Speed, strength, conditioning, endurance, toughness, and raw physical ability make up your athleticism, while boxer skill is made up of ratings for every single punch in the game, including location (jab to the head, jab to the body). Each punch has a skill meter ranked from 1-20, and as your punch levels up, it becomes more accurate. "When you start the game and your character is at level 0, you need to rely on your raw physical strength," adds Hayes. "But then once you've leveled up that punch a few times, now you might be able to get a flash knockdown with that same punch."

This all works back into your created characters in Legacy mode, and of course, your character fighting in prison. No skills, just raw power. You start out as a great athlete, it's up to you to mold him into the boxer you want to become.

Do you have what it takes to trade in your orange jumper for a championship belt?

Just be prepared for a barrage of flying fists (and F-bombs) headed your direction.