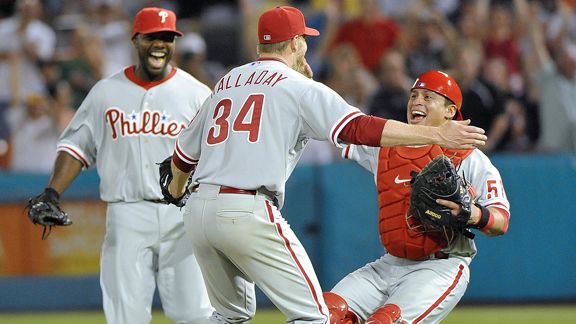 McGilberry added all those zeros to his bank account by being the first person to throw a perfect game in "2K10," and he did it by pitching with, of all people, Kenshin Kawakami. (2K should have doubled the prize for that.)

Today, 2K Sports announced that the million-dollar perfect-game promotion is back on for "Major League Baseball 2K11," but this time there are some changes to the rules.

First off, the competition's start date has been pushed back. Last year, McGilberry won on the first day the game was released (and almost a month before baseball season started) using spring training rosters and pitching inside a spring training stadium. This year, gamers will have more of a chance to practice, as "MLB 2K11" ships March 8, but the first day of the million-dollar challenge isn't until April 1. That way, gamers will be playing with the Opening Day starting lineups inside virtual Major League ballparks as they try to be the first person to throw a verified perfect game. (You'll need to record yourself playing and send it to 2K.)

"We wanted to give the competition a more true-to-life experience," says Chris Snyder, 2K Sports' director of marketing. "This year, we wanted the competition to coincide more with Opening Day, so now fans who buy the game on launch day will have almost a full month to practice before they go for the million dollars.

"You won't be winning in a spring training stadium this year."

Also new this year is a wrinkle inspired by "MLB 2K11" cover boy Roy Halladay and his son Braden, 9.

Snyder explains: "Last year, Halladay's son, who is about 13 years old, was telling us about how he was going for the perfect game and had it through seven innings. We were listening to him, but at the same time we were cringing a bit because the rules last year stated that you had to be 18 years old to win the million dollars. So this year, we opened it up even further and dropped the age limit to 13. We took this directly from Roy's kid and wanted more people to have the chance to go for the perfect game this year."

As for any new pitching mechanics that gamers will need to perfect before hitting the mound, Snyder says 2K isn't ready to announce anything specific just yet.

"We'll get back to you on any changes and features in the game that are going to tie into this," he tells me, "but rest assured, it's our goal to not only give this money away, but we want to make it challenging. So improvements definitely went into the game to achieve that.

"We were very happy with the promotion last year. It got us more impressions than almost anything we've done at 2K Sports, but we also learned a ton from it, so we think it's going to be even bigger and better this year. We're pretty excited."