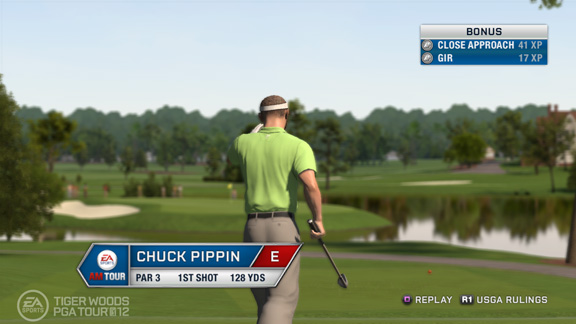 One of the biggest problems I've always had playing through a career in any "Tiger" game is I never felt like I was working toward any type of goal that carried true meaning. It's not like "Madden" where I'm trying to get my team to the Super Bowl or "NBA 2K11" where I'm out to win the NBA championship. But now that EA Sports has signed an agreement with Augusta National Golf Club to finally include the Masters in "Tiger Woods PGA Tour 12," looks like I finally have that meaning I was looking for (besides, I always wanted a green jacket).

"You start out as an amateur qualifying at a local event," explains producer Scott Stutsman. "That gets you onto the Nationwide Tour, then after so long you go to Q-School in order to get your PGA Tour card."

Throughout the qualification process, your golfer is growing in abilities thanks to an increase in XP. You'll also see improvements thanks to the addition of caddies who will give you advice and help you master each course.

"It's a growth process you go through, season after season, year after year," Stutsman says. "With the eventual goal to work your way up and play the Masters." 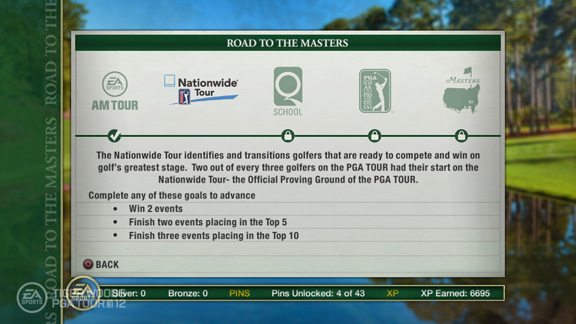 EA SportsYou'll have to prove your skills on the Nationwide Tour before moving on to Q-School. Launch gallery »

And while this career mode is all about taking your created character and trying to live the digital dream of a top player like Tiger, the mode actually starts out with you playing as Tiger himself.

Says Stutsman: "We roll you into career playing as Tiger Woods on the 18th hole at the Masters and you're trying to break a tie with Anthony Kim. This also introduces you to the new game mechanics. It introduces you to the caddy. It introduces you to how you can zoom out and view your shots and actually look at your lie. It takes you through step-by-step in a mini-tutorial. And then it rolls you right into setting up your character and taking him through the career progression. 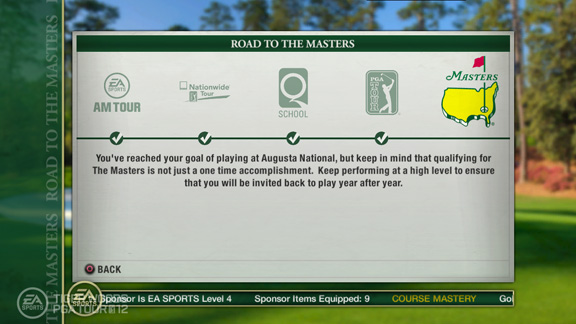 EA SportsIf you want to play the Masters, you'll need to dress to impress. Launch gallery »

Unfortunately for fans of crazy created characters, that doesn't mean some dude with a green Mohawk putting on the green jacket, as according to Stutsman even virtual golfers who play the course need to comply with Augusta's strict grooming policies.

"The Masters is the most prestigious tournament out there and all of the golfers know that when they play that course, it's a special invite," Stutsman says. "You've got to treat it respectfully, so while you can use your character, if you're wearing shorts or whatnot, we give you a uniform that presents yourself properly to play an authentic Masters experience. So if you have wild green hair, you'll see some green there, but you'll have a hat on. And again, it's just a matter that we want people to understand the opportunity they're getting when playing the Masters."

Good thing the game isn't for Kinect or Augusta might use the Microsoft camera to make sure I'm dressed appropriately in my living room.

Another way to play

In addition to Road to the Masters, EA Sports also introduces a new mode this year called Tiger at the Masters. Here, you'll find the exact scoring in place for the years Tiger won the Masters and you'll progress through those years with the goal of meeting or beating the scores put up by the real champ. 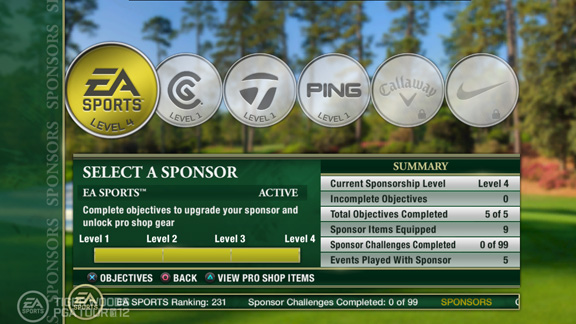 Adds Stutsman: "You'll play through this mode as Tiger and as you play, the leaderboards that you're playing against are the exact leaderboards Tiger played against. So for the first year where he won the tournament and broke the record (18 under par), your goal is to go through and maintain the scores that he had round by round. Then after you progress through the four different years, there will be a fifth tournament which will be the Masters this year. You'll compete against the actual leaderboards from this year as they happen, then once the tournament is over, we'll keep those leaderboards active so you can continuously try to compete against the scores put up in this year's Masters.

"The final piece to this is that we have all of the stats from other years of the Masters and we'll run live tournaments where you play against scores from say, the 1995 Masters. Then we can go in and change up what year you are playing against throughout the year. This mode gives you the opportunity to play the Masters tournament right out of the box without having to go through the entire career mode. This way you can see the course, feel the atmosphere with the crowd, and see what it's like to play in the Masters and play on the most accurate recreation of any course we've ever designed. The level of authenticity and accuracy of everything from the greens to the azaleas will blow you away."