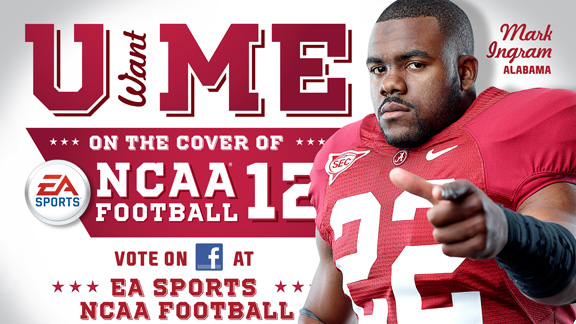 Following in the footsteps of a wildly successful fan vote that decided the "Madden NFL 11" cover (Drew Brees won in a landslide), fans will now get to decide the cover athlete for EA Sports' upcoming "NCAA Football 12."

Beginning today and running through April 4, gamers can log on to facebook.com/easportsncaafootball to cast their votes for one of four players: Nick Fairley, Jake Locker, Mark Ingram, or DeMarco Murray. Each player will participate in viral video campaigns to state their cases for the cover, while EA Sports will also be distributing posters, banners, and even lawn signs to help spread the message of each candidate grassroots style.

Fans can vote once per day for their favorite player, with EA Sports announcing the winner on April 19.