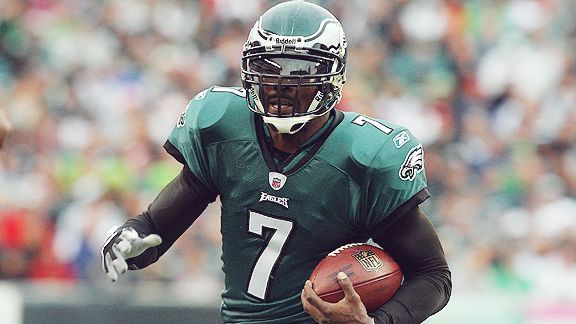 Jim McIsaac/Getty ImagesMichael Vick continues to run away from the competition in the "Madden 12" cover vote.

I thought Drew Brees had a good chance to be the first ever back-to-back cover athlete in "Madden" franchise history. But after looking at the numbers given to me by the editors over at SportsNation, I can already say that I underestimated the fan support generated by Adrian Peterson and the Vikings. In fact, Peterson has already jumped out to a whopping 62 percent to 38 percent lead over Brees in Round 3 of the "Madden NFL 12" cover vote with no signs of slowing down. Might be good for Brees and the Saints, though, as no one should try and tease the curse two years in a row. Might be bad for the knees.

In other voting news, Michael Vick continues to roll in his bracket, opening up a comfortable lead over Hit Stick hero Patrick Willis, 59.5 to 40.5. Can Willis, who already took down The 12th Man and "Dancing Machine" Hines Ward pull a comeback? It's up to the 49er faithful to get out and support their best player before it's too late.

As always, it's not too late to let your voice be heard. Get out and vote for your favorite players today while there's still a chance to turn things around.