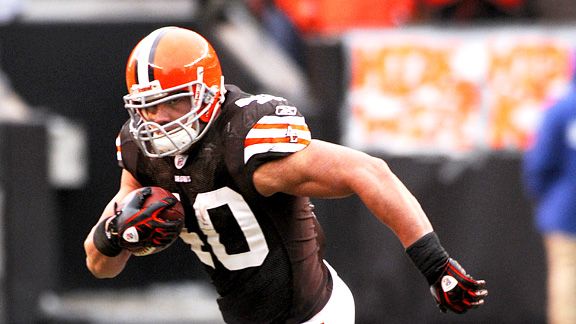 In what has to be one of the biggest surprises in "Madden" cover history, Peyton Hillis defeated Michael Vick in the finals of the "Madden NFL 12" cover vote by an eye-popping 65.6-34.4 percent margin and is now poised to pose for the cover shot Thursday morning in New York.

Over 1 million votes were cast in the finals alone as Hillis rode a wave of support triggered online by ClevelandBrowns.com, a multitude of fan sites dedicated to pushing a Hillis cover, and a strong showing from Arkansas fans who showed up big for their buffed-out former back.

Hillis, a 10th seed in the "Madden" tournament bracket, upset Ray Rice, Matt Ryan and Aaron Rodgers before beating Vick and earning his spot on the cover.

And while I picked Hillis to win once he made the finals (I figured a vote for Hillis was also a vote against Vick for animal rights fans), when I first looked at the bracket before the tournament even started, Hillis wasn't even in my top 10 of players whom I thought would win.

Just goes to show why online voting is so fun to follow. Forget Vick, Drew Brees and Adrian Peterson, Peyton HIllis is now the face of video games for the NFL, and Browns fans everywhere can celebrate their star while at the same time crossing their fingers that the dreaded "Madden" curse won't take down the new king of Cleveland.