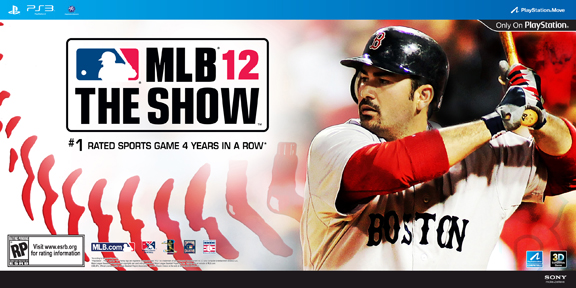 Looking at the list of "MLB: The Show" cover athletes makes me wonder if the game is really produced in some secret Boston studio as opposed to Sony's San Diego offices. From David Ortiz and Dustin Pedroia to the "MLB 12: The Show" cover star Adrian Gonzalez, there's definitely some Red Sox love coming from the creators of the game.

"It's part of playing for a big market team.," Gonzalez tells me over the phone as we talk Red Sox and video games. "People know who you are, a lot of people watch your games day in and day out. It's a great organization with a lot of history. Sony knows where to go to pick the right players."

And Gonzalez isn't just acting as a spokesman for the game, he's also a fan of the franchise, admitting that he just played three games of "MLB 11" last night against his brother-in-law.

"I played the game all throughout high school, and I still play," says Gonzalez. "I definitely enjoy it, and the ratings say it all: It's the best baseball game out there.

"It's so realistic, and my favorite part about playing is actually seeing all of the little mannerisms they included in the game between pitches. They're dead on, and for me, that's pretty fun to see."

Jon Robinson: As a fan of "The Show" and someone who is featured in the game, what do you think of your character and how he plays?

Adrian Gonzalez: I think he's too slow for what I really am. I wish they would increase my speed a little bit so at least I can steal a few bases. It's almost too realistic because I'd love to be able to steal more in the game than I do in real life. [laughs] Like I said, they just nail so many of the little details, it's amazing.