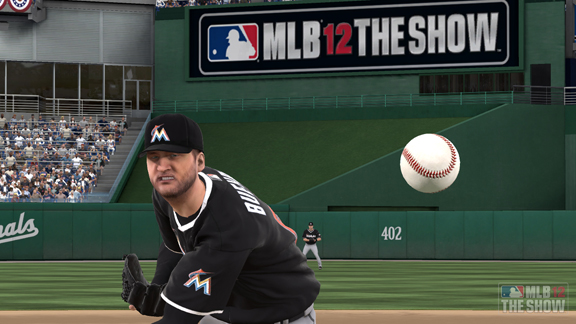 Sony Computer Entertainment AmericaLook for "MLB 12: The Show" to hit stores March 6 for the PlayStation 3 and Vita.

That's right, the Giants second baseman took the flip, touched the bag, but before he could rifle the ball to first and turn two, he was taken down by a hard-sliding Matt Kemp.

Just another chapter in the Dodgers/Giants rivalry, but a great day to be a gamer as Sony has finally added not only player collisions, but collision awareness in "MLB 12: The Show."

Amazing news for anyone who has followed the franchise, as we're not just talking about canned animations at the plate or when a player is breaking up a double play. It's all around the field, complete with all new tag and sliding animations, making gamers feel like the action on the virtual diamond is more real than ever as you will no longer see the random player-through-player ghost-like animations that have plagued the series for years. And since cyber athletes will not only collide, but be aware of the potential collisions, players react in a much more realistic manner, sliding around tags from all angles, dropping the ball more often when going for the sweep tag, and even giving the occasional spike when necessary.

And while that's far from the biggest feature added to this year's game, it's one of those little things that just adds so much to the overall experience as Sony attempts to blur the lines between what's seen on TV and what you're controlling in "MLB 12: The Show." It's an experience that I had the chance to play recently during an afternoon in Sony's San Diego studio, and I have to say, I was blown away by how those lines are now more blurred than ever. 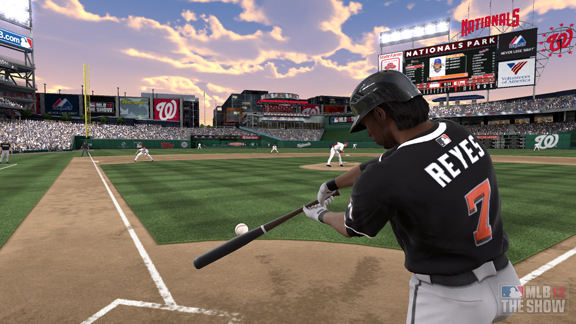 One of the biggest improvements "Show" fans will notice right away is the improved ball physics. In past games, there wasn't the amount of hit variety you'd expect from a baseball simulation, and that had to do mainly with the fact that the game's math was off. So this offseason, one of the more hard-core members of "The Show's" engineering team took up the challenge and rewrote the entire ball physics code based on the actual math for how a spinning object reacts when it strikes everything from the bat to the playing surface to one of the bases. The results? Incredible. The ball speed off the bat has now been increased to MLB levels, while the spin off each hit now comes into play more as you'll see grounders with topspin actually scoot through the infield faster for base hits. I even had one play where I launched a ball 400 feet toward the wall, and the computerized Matt Kemp jumped up to rob the home run, but as he hit the wall, the ball bounced off his glove and rebounded back onto the field. It was just one of those plays that made everyone in the room shout, with the producers smiling at each other knowing how much a moment like that rocks.