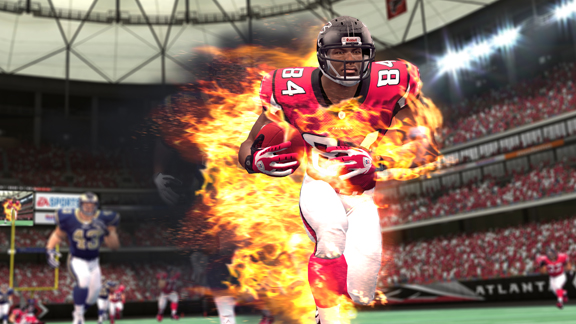 EA SportsRoddy White and the Falcons should be a force in the new "NFL Blitz."

Roddy White might have lost out on the cover vote, but the Falcons are still looking like one of the better "Blitz" teams out there. Michael Turner can bowl defenders over, Tony Gonzalez is a monster over the middle, Matty Ice is throwing virtual darts out there, and White is a threat to take any catch to the house.

But are they better than the Saints?

Talk about a "Blitz" battle with some explosive firepower.

Check below for the full lineups for the NFC South teams, and in case you missed it, be sure to go back and see who made the cut in the NFC East and NFC North.

While the Falcons have a lot of things going for them on offense, this is one of those cases where I wish "Blitz" had a bench player who you could swap in for certain plays. If the game had a "wildcard" like that, I'd want him to be Julio Jones. I understand why they put future Hall of Famer Tony Gonzalez in the game instead of the rookie, but I think when EA goes back to the drawing board for "NFL Blitz 2013," this idea of an extra player you could sub in on certain plays (or maybe at halftime like "NBA Jam"), might be something they can look into.