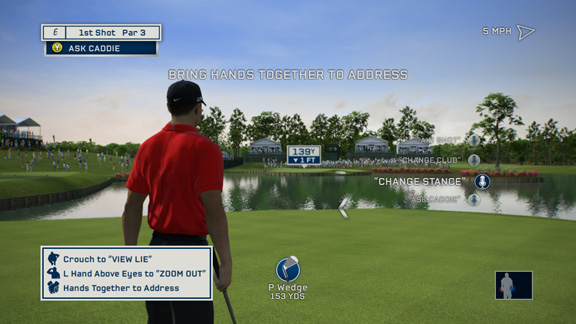 Playing "Tiger" with the Kinect controls adds your real swing to the virtual course.

It's the 16th hole at Augusta National, and with a Green Jacket on the line, I decide to try something never before seen in a golf video game.

I'm going to skip my shot across the pond.

That's right, thanks to the new control scheme found in "Tiger Woods PGA Tour 13," you can now play the game of "skip it" on the Par 3, skipping the ball across the water and up a ten foot bank in order to reach the green.

And while that's cool and all, it's "Tiger's" new controls that are the real star this year, especially when you factor in the Kinect sensor, not only picking up all of your movements in order to deliver your exact swing (for better or worse) into the game, but also the mic that picks up your voice and enables you to verbally ask your caddie for a change of club.

"We've implemented a 'see it, say it' feature where anything you see on screen that has a microphone by it, you can use the Kinect microphone to verbalize instructions," explains "Tiger 13's" executive producer, Brent Nielsen. "So we have features like change shot, select club, or ask caddie, and you can either select those with your hand or you can literally say, 'Change shot,' and the camera will automatically zoom out and put you in the aim state. You can then move the aimer with your hand, and when you're happy with where you're about to hit the ball, all you need to do is bring your hands together like you're about to address the ball and that puts you right back at your address state and you're ready to take your swing.

"We've tried to streamline everything in the game, but aiming and swinging are the two most frequent things people do in the game, so we wanted to make sure to nail these controls and really make it simple and easy for people to do."

So now, if you want to change your club, all you have to do is say, "Change club," and then say what club you want to use, and there it is, in your virtual golfer's hands. 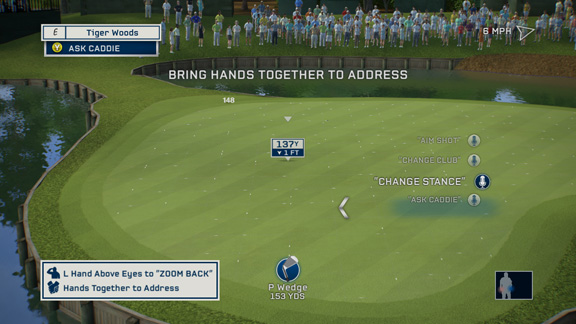 You can now aim your shot by simply moving your hand.

"Through focus testing, we've found that once people realize they can speak stuff and make it happen, that's the way they end up playing the game," says Nielsen. "It's not like the old days where you thought you selected one thing, but maybe you scrolled too far down and didn't realize. Now when you're asking for a 9-iron, you're really asking for a 9-iron, and that's what you're going to get. If you say it, you're guaranteed to get what you want."

And while "Tiger Woods PGA Tour 13" is not Kinect required (you can still use a controller if you desire), it's the first sports simulation to fully utilize all of the motion and voice controls Microsoft has to offer. Even the various front-end menus have been streamlined (simple up, down, left, right arm movements rather than holding your hand over a box and waiting for a bar to fill up), enabling you to quickly navigate your way through each screen and get you to the green.

Then again, even if moving screens with your hands like you're Tom Cruise in "Minority Report" is pretty sweet, it's back on the course where Kinect really shines.

"This way, the Kinect picks up your full body movements when you swing, capturing a much more accurate representation of everything from how you address the ball to how you follow through," explains Nielsen. 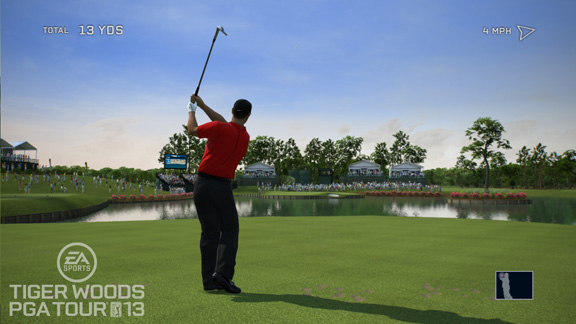 Gamers can now get a new club by actually asking for it thanks to the Kinect's mic.

And while golfers can take their cuts with empty hands to mimic their real swings, one thing the Kinect also enables you to do is to put a real club or a weighted shaft in your hands, and when you swing with the real club (if you have enough room, that is), the camera will take that exact swing and put it into the game. The Kinect camera is there to track your hand, hips, and arm movements, so while it doesn't pickup the club (concentrating on the player's skeleton instead), it enables you to take your natural swing to the video game, rather than simply pretending to swing a club and going through the motions with empty hands.

"We've also revamped the swing mechanics when you play with the controller, and those mechanics are even applied to the game when you play with Kinect," adds Nielsen. "Golf is really a game about feel, and in past games, it was more about math. You were really playing the percentages rather than playing the physics and the movement of your swing. Now I feel like I need to actually have touch, and because of this, I think this is the most immersive the franchise has ever been."

And this new physics and animation-driven swing really changes how you approach every shot in the game.

"The left stick is still going to execute your shot," explains Nielsen. "If you simply pull back and push forward on the left stick, you're going to take a shot. But with our new ANT animation system, now when you pull back with the left stick, you'll see a swing plane. We show you the ideal swing arc based on the shot you've setup. You now have full control of this swing plane, so if you pull back and to the inside, you'll now see the golf club pull back to the inside. So for right handed golfers, that would be more of an outside swing. This enables you to customize your swing any way you want.

"The second thing we've added is tempo. You hear professional golfers talk a lot about having good, even tempo on their swing. So now, not only does your swing plane matter, but how far you draw back and your swing tempo come into play. In past games, we've watched people try to swing harder on a shot by thrusting the left stick forward. Sorry to be breaking any myths out there, but how hard you thrust the stick forward in the past didn't actually make you swing harder. We were just calculating where your swing ended up. Tempo and power didn't actually matter. That was a separate button. But this year, you can swing a little harder to get more power on your shot, but by doing this, you need to be a little more perfect and precise about how accurate your swing is. So you can swing harder, but that means there is more chance for a miss-hit." 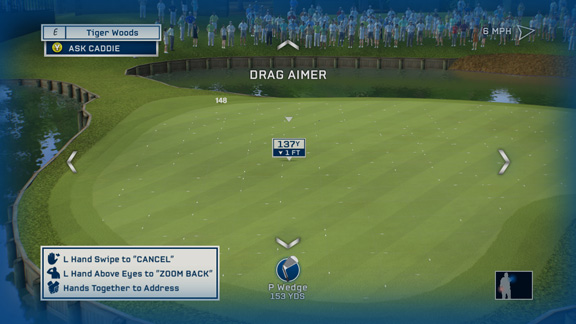 Says Nielsen: "The final thing the right stick enables you to do is hit anywhere you want on the ball. Before, if I was in a bunker, it made no difference if I was buried or not. It didn't matter. It was all based on percentages where all you had to do was hit the ball harder. You just had less power because you were in the sand. It was a math equation. Now you have full control over where you hit the ball, enabling you to blast the ball out of bunkers and executing your shot the right way."

So taking these ideas back to Kinect, you can see how your backswing and tempo will come into play with the motion-controls. Now you're actually trying to hit the ball as hard (or as soft) as you would out on the real course, and you'll need to differentiate how you swing for chips, putts, and drives. This isn't motion-controlled golf you can fake while flailing your arms and sitting on the couch. This is the real deal, with the Kinect camera capturing hundreds of data points and incorporating your movements onto the virtual Tiger Woods you see on screen.

"We're creating an unlimited shot toolbox where if you see a shot in golf, you can now execute it in our game," says Nielsen. "The 16th hole at Augusta is the eye-opener for me. The crowd goes absolutely bananas when the players skip the ball across the water in real life, and now in our game, you can put the ball back in your stance, choose the right club, and then strike the ball on the top half and the physics will actually enable you to skip it across the water.

"We actually have competitions doing this in our office for hours to see who can get the ball closest to the pin after skipping it across the water. This is something we've never been able to do before in our game, but thanks to the new physics and swing mechanics, like I said, if you see a shot in real life, you're going to be able to do it in our game this year."