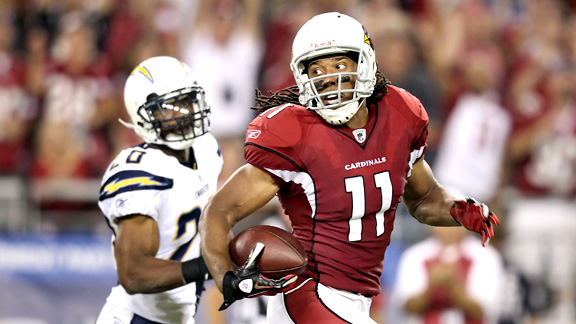 Christian Petersen/Getty ImagesLarry Fitzgerald should be looking over his shoulder. Patrick Peterson wants the "Madden" cover.

With the "Madden NFL 13" cover vote about to kick off March 7, EA Sports is revealing the 64 players who are eligible to win their way to the curse, one division at a time.

Yesterday, EA Sports broke down the match-ups in the AFC West, and today, they stick with the "west side is the best side" mentality, revealing the play-in round for the NFC West.

Here's how the opening round will look:

Larry Fitzgerald against Patrick Peterson should be the closest vote in my opinion, as you have the former "Madden" cover athlete going up against one of the most electrifying young players in the league. The Vernon Davis versus Patrick Willis vote should also be a good one, but Willis lost in last year's cover vote, then lost the "NFL Blitz" cover vote back in December, so for whatever reason, just doesn't seem to get the fan support he deserves. Personally, I'd rather see Alex Smith in the play-in round, as his career redemption deserves a little "Madden" love.