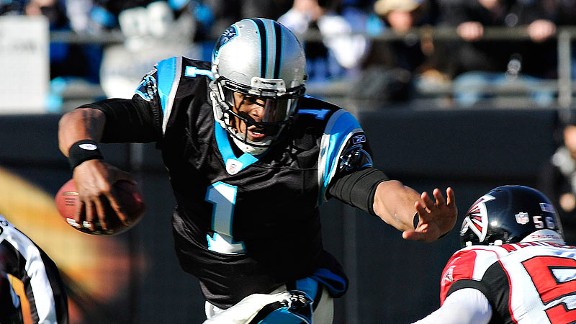 Sam Sharpe/US PresswireAfter receiving more votes than any other player in round one, Cam Newton is the favorite to win the "Madden 13" cover.

One year later, Hillis' career has been cursed to the point where he wasn't even invited back to defend his cover, and Michael Vick already got bounced out of the tournament by teammate LeSean McCoy.

What a difference a year makes.

And actually, what a difference a month can make in trying to predict exactly who will end up on the cover of "Madden NFL 13." What started as a 64-player tournament with everyone picking Tim Tebow to win it all, is now down to 32 players, and even though Tebow has already advanced over Von Miller in a tight first-round race, I really don't see a guy who is about to be booted out of Denver winning a popularity contest anytime soon.

Then again, when the vote is open to the public, you never know, as maybe Tebow's fans will vote by the millions in order to help lift their fallen quarterback when he needs them most. Or maybe, just maybe, enough people will come out and support Sebastian Janikowski just so we can see the first kicker on the cover of the game.

Voting for the final 32 competitors is bracket-style, with each player given a seeding based on a variety of factors, including on-field performance, marketability/popularity, and the amount of votes they received to advance in the teammate-versus-teammate round of 64.

"Most fans look at the seeding from a straight on-field performance perspective, but what people need to realize is that the winner represents EA Sports, he represents 'Madden NFL 13,' and there are a lot of factors that we consider," explains Anthony Stevenson, the marketing director behind the "Madden" franchise. "It's fun because we created this tournament thinking about March Madness and everything that goes along with it, from Selection Sunday to the brackets. Any time the committee gets together, there's always teams that get snubbed, there's always the teams that people think are overrated or underrated, and that's the same type of thing that makes the 'Madden' cover vote fun. That's what sparks debate.

"Look at what happened with Tim Tebow. Before Peyton Manning joined the Broncos, Tebow would've been one of the higher seeds in the tournament. But now, there's so much uncertainty surrounding him -- will he be traded, will he be a starting quarterback somewhere else, will he even still be a quarterback -- that now he's a 14-seed. Just like March Madness, you just never know what will happen next."

But before you click for your favorites (or the player you most want to curse), here are some of my initial thoughts and predictions on the upcoming round after getting a first look at the bracket.

THE NEWTON OR BUST BRACKET

Newton received the most votes of any player in the round of 64, and I don't expect him to have any problem beating Blount here, even if I can watch Blount hurdle defenders all day. Cam seems like he's on the fast track to the cover, but will any type of sophomore slump be escalated by the curse? 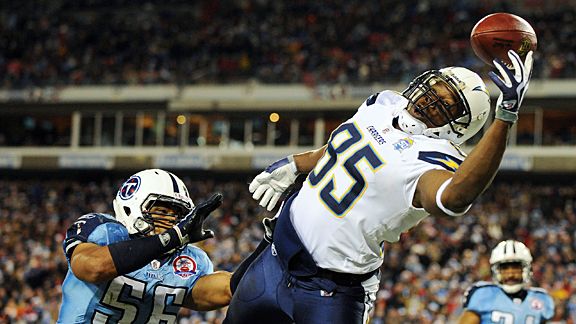 Don McPeak/US PresswireAntonio Gates has been a beast in "Madden" for years.

Throughout the years, both these guys are known as much for what their characters do in "Madden" as they are for how they perform in real life. And while Gates barely beat Philip Rivers in the first round, I think all of the uncertainty surrounding the Colts will help Gates get past the former "Madden" Bowl champ.

Little known fact: Bush was going to be on the cover of "Madden NFL 08," becoming the first player ever to earn the cover of "NCAA Football" and "Madden" in back-to-back years. But because of the controversy surrounding the USC scandal at the time, EA made the last-minute switch to Vince Young. This is Bush's chance to finally claim a "Madden" cover of his own, but judging by the numbers McCoy was able to generate against Vick, it doesn't look promising.

This is not only a battle of former cover stars, these two actually shared the cover of "Madden NFL 10." I'm taking Fitzgerald here, but after Troy beat Big Ben in Round 1, it wouldn't surprise me if the hard-hitting safety kept his winning streak alive.

Willis was just named one of the best "Madden" characters of all time. The man needs a cover.

How embarrassing would it be to lose to a kicker? MJD is one of, if not the single best, "Madden" gamer in the NFL. He's already won the "Madden" Bowl, and I think he might be the one player in this tournament who would truly appreciate the honor of being known as the "Madden" guy in the league and to gamers around the world. I just hope the only kicker I know dealing with anger management issues doesn't boot MJD's dream out from under him. 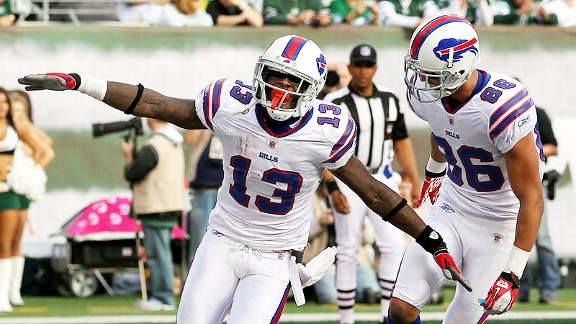 Anthony Gruppuso/US PresswireStevie Johnson said any touchdown dance this year will be tame -- with no penalties.

If Revis is the Superman of cornerbacks, Johnson's uniform must be made of Kryptonite. Johnson torched Revis when the two met last season (even mocking the Jets and wide receiver Plaxico Burress with a simulated shooting touchdown celebration), so it will be interesting to see what happens when the two square off in a fan vote. I'm taking Revis (and still hoping that "Madden 13" will feature Johnson's now-infamous TD celebration).

Fresh off a Super Bowl victory, Cruz was one of the top vote-getters in all of Round 1. But will he be "Orakpoed" in Round 2? If only EA and Geico could pull off a deal to put the caveman on the cover (in his cheerleading costume, of course).

THE RODGERS CAN'T LOST TWO YEARS IN A ROW BRACKET

Last year, I thought there was no way Rodgers would lose to Hillis. This year, can Haden pull off a similar upset? I doubt it, especially since Browns fans already felt the sting of the curse for one season. Why would you vote your team to the bottom two years in a row?

If Lynch wins, can "Madden 13" ship with a bag of Skittles in every box? If so, I'm voting "Beastmode" all the way.

Rice already won the "NFL Blitz" cover vote earlier this year, so if Rice wins the "Madden 13" cover, he will be the first player to appear on the cover of two EA Sports games in the same year. Then again, Rice told me recently that he has started to believe in the "Madden" curse: "I might have to become a believer now in the 'Madden' Curse after I've seen what happened this year [with Peyton Hillis]," said Rice. "I never used to believe, but now I don't know what to think."

Brees hopes to be the first player to appear on the "Madden" cover two separate years. But to accomplish that, he'll have to first take down Matty Ice, a former "NCAA" cover athlete, not to mention his NFC South rival. If I were a betting man, I'd put everything I had down on Brees. 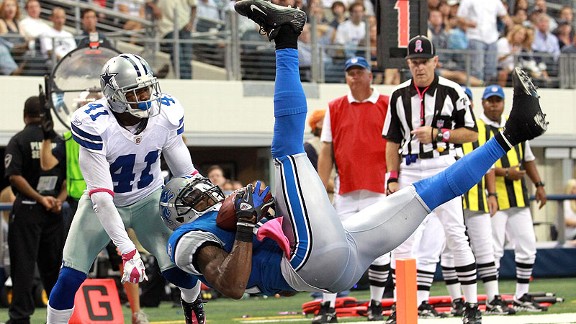 Ronald Martinez/Getty ImagesPlays like this help make Megatron a favorite to win it all.

How cool would the "Madden" cover be if it was Johnson as Megatron on the front of the box? I'm thinking Johnson has a good shot at winning the whole tournament.

The battle of the sack masters. A few years back, when Allen was in the initial "Madden" cover vote, he appealed to those with mullets, saying if everyone with a mullet would go out and vote for him, he would win. It didn't work back then, but maybe these days there are more mullets on the Internet. If so, look for Allen to move on to the next round. 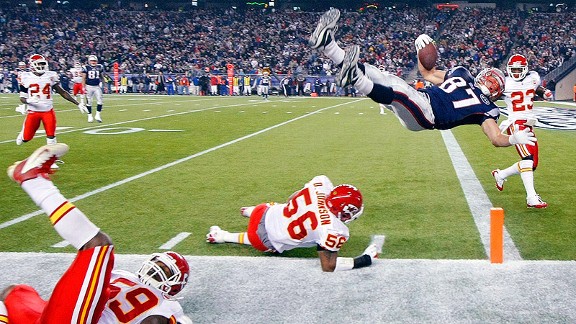 With Lloyd leaving the Rams via free agency and signing with the Patriots, we actually have two Patriots in the final 32 (and no Rams!). These two have both been actively campaigning for the cover, each releasing a pretty cool video to show why they should be cursed/paid by EA. (Check them out here: Lloyd, Gronk). If Gronk wins, will he go shirtless to the photo shoot?

What are you waiting for? Head to the SportsNation "Madden" cover vote site and let your voice be heard.