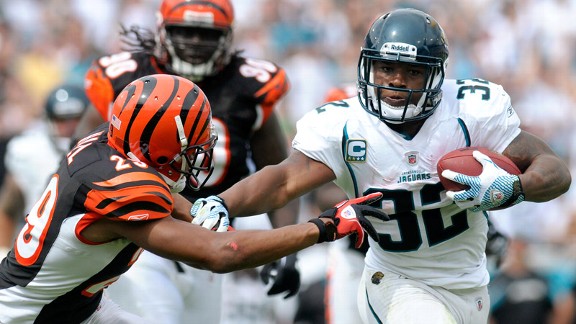 AP Photo/Phelan M. EbenhackMaurice Jones-Drew is looking like a strong contender for the "Madden NFL 13" cover.

When I first saw the brackets for the "Madden NFL 13" cover vote and saw that both Sebastian Janikowski and Shane Lechler were eligible, I thought EA Sports was putting itself in serious jeopardy of having a kicker or punter on the cover of their game.

I was betting that some sort of "Elect a Kicker to the Cover" campaign would've been started by some radio DJ as a joke, and next thing you know, EA's big box reveal would be an awkward picture of "Sea Bass" mugging for the camera.

Luckily for EA Sports, no such campaign occurred, and after Janikowski eliminated Lechler in the teammate versus teammate play-in round, Janikowski's numbers fell back to earth in the round of 32 voting, and the kicker is losing by a pretty wide margin to Maurice Jones-Drew, 65 percent to 35 percent.

And while I broke down some of the big winners of the week yesterday, there are two other match-ups that I'm surprised have turned into complete blowouts.

The first is the battle of "Madden NFL 10" cover stars, Larry Fitzgerald and Troy Polamalu. Fitzgerald jumped out to a huge lead from day one, and his supporters haven't let up, giving Fitzgerald a shocking 72 percent of the vote to date.

And if you thought that was huge, wait until you hear the numbers Rob Gronkowski is putting up. Gronk is beating down his new Patriots teammate, Brandon Lloyd, collecting a whopping 85 percent of the vote.

And while it might be too late to change B-Lloyd's cover fate, it's not too late to let your voices be heard for your other favorite players. Head to the official SportsNation cover vote page by Wednesday at 10 am ET to cast your votes before we move on to the Sweet 16.