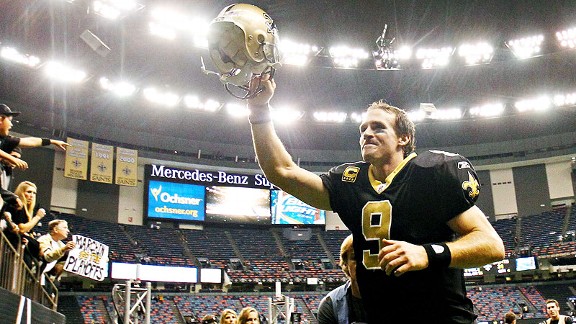 Derick E. Hingle/US PresswireDrew Brees could become the first two-time "Madden" cover star. Will the curse be twice as strong?

Early numbers are in for the latest round of the "Madden NFL 13" cover vote, and there are a couple of surprises to report.

The closest race right now is Drew Brees versus Ray Rice. Rice took an early lead on Wednesday, but then Saints fans came out in full force Thursday night, and now Brees is up by the narrowest of margins -- 51 percent to 49 percent -- which translates to just a few thousand votes. I expect this one to come down to the final hours next week.

Another tight race is between Larry Fitzgerald and LeSean McCoy. After beating both Michael Vick and Reggie Bush convincingly, McCoy has fallen behind Fitzgerald by a few percentage points. If Philly fans want to push Shady through to the Elite Eight, they need to show up big this weekend, as the latest numbers show Fitzgerald holding 54 percent of the vote.

In the Battle of New York, Victor Cruz holds a commanding lead over Darrelle Revis, and with the numbers Cruz continues to put up round after round, the Giants receiver could end up being Cam Newton's biggest competition on the left side of the bracket.

Speaking of the left bracket, Patrick Willis looks to pull off the biggest upset of the tournament so far, as the 11 seed (who already upset both Vernon Davis and Matt Forte) is currently crushing former Madden Bowl champ, Maurice Jones-Drew. Will we finally see a defensive player appear solo on the cover? Hasn't happened since Ray Lewis introduced the Hit Stick back in "Madden NFL 2005" (arguably the best "Madden" of all time).

If anyone deserves the honor, it's Willis, the player who brings the Hit Stick with him on every play.

"When you're playing 'Madden,' people throw the ball over the middle too much. I want them to show people get a crushed collarbone or a crushed ankle or a crushed sternum or something," Willis told me during a recent interview. "I wish when you put a Hit Stick on someone, you could put them out of the game. I was playing the other day, and I was in a Cover 2 Man, and my homeboy was completing passes over my defenders every time. I just want to Hit Stick him and put him out of the game."

Sounds like it's time to bring back the old "Madden" ambulance and put it on the cover next to Willis. Talk about a box to remember.

Don't like the results? Head to the official SportsNation Madden Cover Vote page and cast your vote today to make a difference before time runs out on your favorite player.