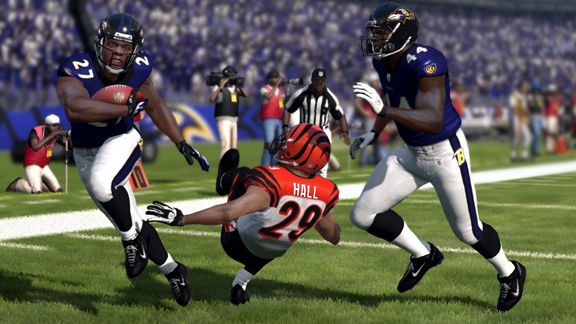 Player of the Game: Ray Rice

Heading into the fourth quarter with a 17-3 lead, you figure the Ravens had this one locked up tight. With that defense, no way the Bengals are coming back, right? But that's why they play every minute as Andy Dalton led his team to 10 straight points, pulling to within four with plenty of time still left on the clock. But that's when the Baltimore D stepped up and played its fiercest ball of the day, picking off Dalton with the clock winding down to secure the 17-13 win. Yowza!

ESPN.com has teamed up with EA Sports to simulate every week of the NFL regular season, including exclusive screen shots and stats. Check out "Madden NFL 12" today on Xbox 360, PS3, PSP, Wii and Playstation 2.