ESPN.com is in the game now.

The leading sports site on the Internet is your new home for the coverage of the sports video-game industry. 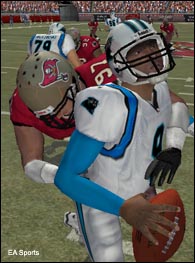 Of course, you probably already know that, because you've found your way to ESPN Gamer.

So what can you find today in the debut of our Gamer section? And what can you expect to see over the upcoming weeks?

Well, we kick off the site with everything you need to get ready for some football: