Twenty seconds left on the clock. Ray Lewis is on offense, I'm on defense. I toggle through my sets thinking, "run." I look over at the All-Pro linebacker and he's busy selecting a facial expression. He settles for a blank stare.

And puts down his control pad.

So we sit in silence and watch the clock tick down. Until the quarter ends and Lewis begins cheering and applauding and telling himself what a great coach he is. 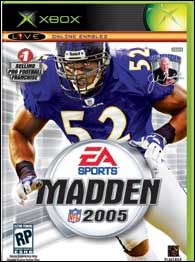 His playcalling is suspect in my book, but I can't help but appreciate his decision. He's not looking for my approval. And he doesn't care if you think he's cheesy or cowardly or just plain uncool. He's plenty confident in himself.

"I'm a true believer that there's one me," Lewis says. "A lot of people put limitations on things, I don't."

Which enables him to dance like a madman before games; talk trash during games and even pose for a picture on a game with a well-documented jinx -- Electronic Arts' Madden 2005, the game we're trying out.

"(The chance to represent Madden) is a blessing. It's everything a blessing entails. God says he prepares a table for you. This is the table. You don't shy away from it."

Ray Lewis is in preacher mode. He gives sermons in the offseason. And you can almost hear EA shouting a collective "Amen."

But what about the unbelievers? What about the mob of superstitious athletes and drama-crazed media who don't believe a coincidence can occur four straight years; who can't understand how Eddie George, Daunte Culpepper, Marshall Faulk and Michael Vick could all fall victim to injuries the same year they appeared on a Madden cover? How do you convince them?

"I'm just gonna go out and have the best season ever," Lewis says. "Then that'll be the curse."

Well, at least for writers in need of a new angle.

All the ridiculous hype aside, Lewis is honored to be the first defensive player ever to grace the cover of the most popular sports video game title.

"This opens up so many doors for the defensive side of things," he says. "To truly get the same exposure the offensive side gets.

"The last 10 Super Bowls, how many offenses have won it? Football's a defensive-based game."

And that's why EA has revamped the game's DB coverage, so that stars like Champ Bailey and Charles Woodson won't get burned every other passing play.

That's also why EA created the Hit Stick, which allows you to perform Ray Lewis-like tackles on opponents by using the right analog stick. If timed to perfection, the defense can cause a fumble or a dropped pass.

"Now you can't score 80 or 90 points," Lewis says. "Offensive players are gonna be whining and complaining. They'll have to learn it all over again."

"In the offseason, this is what we do," he says. "This is the way you kill four, five hours. You have your boys over, you have your kids over, and you have a big tournament. We might have three TVs going on.

"It's relaxing. It's pure entertainment."

"I don't gamble," Lewis says. "You don't bring in the ugliness -- you don't take somebody's rent money, or take food off of kids' tables."

But he will take advantage of his trash-talking skills, whatever the contest -- video games or football.

"The button you wanna push is intimidation," he explains. "You don't wanna push the other button, if he has a button that gets him excited, well, unless you just want a great game, great competition.

"Then you just play your game. Dominate how you dominate."

He's pressing the buttons now, the ones on the control pad and the ones in my mind that I didn't know I had. He's preaching again, mouthing off in my ear and staring through the side of my head, trying to see how his words are making their way into my psyche.

I throw it. He picks it off.

Lewis thinks he's got me beat now, on every level. But I'm not conceding anything.

Until I see him place the control pad on the table. Until I realize that, with his team leading 28-20, the two-minute warning approaching, and timeouts frowned upon in an interview session, another half-minute is about to waste away before my eyes.

Then I admit to him, "Good call, coach."