Think you're the best online gamer? It's time to put your money where your mouth is. BringIt.com is opening the door to betting real money on virtual sports. That's right, by opening an account with the site, gamers can bet anywhere from $1 to $100,000 on anything from Gears of War 2 to Rock Band to the granddaddy of them all, Madden. I sat down with BringIt's founder, Woody Levin, to find out more about the site, the betting rules and how they plan to stop junior from running up dad's credit card.

Mag.com: What's the concept behind the new site?
Woody Levin: I went to college in Madison, so obviously the winters were a bit cold, and I used to sit around with my boys and play Dreamcast. We would play for beers or dinner or money or whatever. I took that love of gaming with me after college, and I think online gaming has finally hit that critical mass. But up to now, it's just been about bragging rights. BringIt is about putting your money where your mouth is. Guys are competitive by nature. If you are going to throw a bottle cap, one of your buddies will probably bet you that you can't throw it as far as him. And this is the same thing, really getting that competitive spirit out there and giving everyone the opportunity to be a quasi-professional gamer.

How is this legal?
This is probably the number one question. You can play one-on-one or multi-player games for money, because, under the law, it's considered a game of skill. Your knowledge, your dexterity determines the outcome, as opposed to a random number generator. That's what it really comes down to, the people playing are athletes. If you're more coordinated than me, or have more knowledge than the plays you should run or know how to crouch better in Gears of War, you're going to kick my ass. That's the main difference maker. Federally, we're legal pretty much everywhere in the United States and internationally, but there are certain states that regulate it. There are certain states that do not allow any betting on skill based games (Alaska, Arizona, Colorado, Delaware, Iowa, Maryland, North Dakota, Tennessee and Vermont), but in the majority of states, it's completely legal and there's case law supporting it.

There are so many online glitches in games like Madden. How do you ensure people don't get hustled by someone who knows the money play?
Glitches are just a part of the game, but what we allow people to do is private message and chat back and forth, and then put into the world how you want the game to be played. So if I say no rocket catching or no onside kicks until the fourth quarter unless I'm down by more than 10, then those rules are all recorded. And if you break one of those rules, we have 24/7 customer service where people can submit a dispute. You can say how someone broke the rules, how they cheated, and that person will get a dispute flag. If it's legit, we'll return the money. We're allowing gamers to provide feedback on opponents, much like eBay, where if you see someone who has bad feedback, you're not going to play against them. You're going to play against someone who follows the rules.

How do you match-up opponents with equal skill? Will gamers purposely lose games then bet big against weaker opponents?
That was a big concern for us, but we're doing our best to level the playing field. Just like in golf, you have a handicap. I'm a terrible golfer, so my handicap is 30, but it levels the playing field when I play against someone who is a 5. Same thing with BringIt. You will have a skill ranking based on the BCS system, where strength of schedule really comes into play. It's not like I can go on and just drop 10 matches and then play someone for big bucks because it takes into account who I lost to, who I won against. And we break it down not only overall, but your skill in each game. It sounds complicated, but it gives you a snapshot of what level a player is. It's an actual number representation so that you know you're 20 points away or 200 points away from that player. Then you can make your determination from there if you want to step it up to the next level or if you're looking for a game that's fair where you can win a couple of bucks.

What skill number do you get when you sign up?
Everyone starts at 500. So what we do is we limit how much you can actually play for in your first ten games. For the first ten games, you can only play for the maximum entry fee into the tournament, and that's $50. For games 11-20 it goes up to $100. So now I have a 20 game history on you before you can go up to $250. And after 30 games you can go up to $500. Again, we're trying to give everyone a clear indication of people's skill levels before they get into putting money on the line. 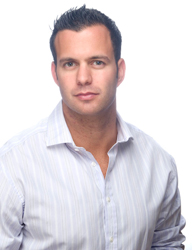 Do bets really go up to $100,000?
We'll do games up to that amount, but you'll need to call up and have everything verified. Eventually, we'd love to have an area for VIP's where everything is verified, everything is safe and secure so you don't have to chase your buddy down. But people could play for big bucks if they want to.

What are the most popular games so far?
Madden is so popular. NBA Live is really popular, too. And on the first-person shooter side, we're seeing a lot of Gears of War 2.

How do you win money in Gears of War 2?
In Gears of War 2, it's first to 10 kills. You can limit the weapons, each player can choose a map. It's a very flexible system as we want each gamer to be able to choose a challenge that they want. And we're recording all of those rules to make sure people abide by them. One of the things we were able to do is—you know how in Madden you can get the game to send you end-of-game stats in email? You can have those emails forwarded to us and our system will automatically read them and determine who the winner is. It's like we're actually tying ourselves into the game, and it's something we think is really the next-generation of this type of Web site.

When does the site launch?
We're in open beta right now. We had a five-week closed beta with about 250 guys on there. We really entrenched ourselves in the professional game community, especially the Madden community. We have Sirus "The Virus", Eric "Problem" Wright, who is the number one Madden player in the world, Dan "Truth" Brown, Chuck "Hollywood" Jones. These are all guys who were on ESPN's Madden Nation. These professional gamers want something like this. They want a safe, secure place where they don't have to travel three hours to play a tournament. That's what these guys do for a living, they play video games, and we're allowing them to do it virtually.

How do you ensure that people using the site are over 18?
You have to put down a credit card to fund money to your account. Registration is free, so anyone can come on and talk trash, and you can even play for free for 45 days. But when we verify, we verify against an age-credit card database just like any online casino. We're using top of the industry standards to verify that it's only 18 and over. We limit the amount of money you can deposit per month on your credit card, we limit the amount of money you can put down on your first few games, and these are all safeguards. This is supposed to be fun. This is supposed to be competitive. This isn't a casino. We don't want people to come on and enter tournaments for their paychecks. This is supposed to be more like a sport. We want to change the gaming landscape, giving people some more incentive to play by winning a couple of bucks. That's more than bragging rights, that's real, and it's something we see as making everyone a professional gamer.