Some gifts people give are pointless: Styling mousse to Dick Vitale. An all-you-can-eat card to Kate Moss. The BCS Championship given to Oklahoma or Florida.

It means nothing because the BCS has no credibility. Florida? Oklahoma? Who cares? Utah is the national champion.

Hey, remind me: What do they give out for one of those BCS things anyway? It's been so long since I cared. Something from Sears? This is the sixth year in the past 10 that the title has been in dispute under this cash-grab, fan-dis, monopoly that the BCS has created. Which is why the title game just doesn't matter anymore. It's like being named Miss Ogallala. Or Best Amish Electrician.

Just take a look at the teams that think they're worthy of being called national champs:

USC? Great year. Wonderful. Let's all go to SkyBar and celebrate. But it lost to Oregon State, a team Utah beat.

Texas? You think beating Ohio State by a nubby three points gets you the title? The Big Ten was 1-6 in bowl games! That's like pinning David Spade!

Florida and Oklahoma? They lost. Utah never did.

So that's it. Utah is the national champion. The Utes should probably have two now, actually. They went undefeated in 2004, too, and their coach still thinks they were the best team in the land. Smart fella named Urban Meyer. Coaches Florida now.

By the way, we're calling our title the "national" championship because it actually includes the whole nation­—all 119 Division I schools—unlike the BCS, which includes 66. Yeah, the BCS somehow eliminated the middleman—the NCAA. The conferences these schools play in take their dump trucks full of cash straight from the TV networks and fairness can go suck a lemon. 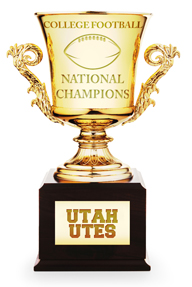 Do me a favor. Call Ohio State president Gordon Gee and ask him why he won't support a playoff. He's one of the most powerful presidents in the NCAA. He could get it done. If he says anything other than, "We don't want to share the loot" then you know he's lying his bow tie off.

"This is not how we normally do things in America," says Utah president Michael Young. "In America, quality usually wins, not conspiracy. And there's a reason people usually enter into a conspiracy. It's money. You make money doing it. And those that are in on the conspiracy want to stay in and keep everybody else out."

Sure, BCS blowhards will hand you schlock about how the college football season is like a playoff, how it's an elimination tournament every week. Really? Well, how come Florida and Oklahoma weren't eliminated with their losses? Utah ran the table, beat everybody set in front of them, including Ala-damn-bama in no less than the Sugar Bowl, and gets the bagel.

Oh, by the way? It was Utah's eighth straight bowl win, the nation's longest streak. Among the losers during that run? Let's see USC, Georgia Tech, Pittsburgh, and now the legendary Houndstooth Hats.

"What else do we have to prove?" asks Utah's magical quarterback, Brian Johnson. Good question. He and the Utes essentially whipped Alabama at home. Handed Nick Saban a garlic necklace to wear the entire offseason. Stepped on his team's neck 21-0 in the first three possessions and never looked back. Let's see. Who was it that was losing to Alabama until nearly six minutes into the fourth quarter? Oh, yeah. Florida.

What, you want the Utes to win a spelling bee? Make a prize-winning souffle? Knock up Angelina Jolie? What?

It just slays me. It really does.

Call Myles Brand, president of the asleep-at-the-wheel NCAA, and ask him if he and his greedy presidents are going to stand in defiance of president-elect Barack Obama, who said again this week he wants a playoff and wants it yesterday.

Call Atlantic Coast Conference commissioner and BCS bully John Swofford and ask him what he's going to do if Obama starts asking the Justice Department to look into anti-trust violations against the BCS. The Utah attorney general has already launched an investigation into that very thing.

Ask him what he'll do if Obama asks the Department of Education to consider withholding federal funds from these schools that have entered into his secret club. You don't think playing in the title game means millions in general-fund donations for a school? That's as unfair as anything Title IX fought against.

Until all these people do the right thing, I'll be celebrating with the true national champions — the undefeated, untied Utah Utes. (Our new slogan: Utahk about a team!)

Love the column, hate the column, got a better idea? Go here.
Want more Life of Reilly? Then check out the archive.