Finishing the regular season at the height of his game, Carmelo Anthony helped lead his Denver Nuggets to its highest win total in franchise history and an early lead in its first round playoff match-up with the Hornets.

He's also having a pretty nice run off the court.

The film will track Clemente from his youth in Carolina, Puerto Rico through his ground-breaking debut with the Pittsburgh Pirates in '55 and his posthumous induction into the Baseball Hall of Fame following his tragic death in a plane crash at the age of 38. Anthony and his Krossover partners David Haines and Alani "La La" Vazquez, Anthony's fiancé, will work closely with Clemente's family in shaping the story, which will also shed light on the icon's family life and humanitarian efforts. For Anthony, whose late father, Carmelo Sr., was Puerto Rican, the project is an opportunity to share the story of a sports pioneer with a new generation -- and to embrace his Hispanic heritage.

"He was a man who loved his sport, loved his people and was committed to showing the world that he could carry the weight of the title 'hero,'" Anthony says via email from Denver, where his Nuggets thumped the Hornets 113-84 in Game 1. "The obvious connection to this film is the Puerto Rican heritage that we both share, but most importantly I want the world to be exposed to Clemente the man, athlete and hero. We are all here to accomplish certain things in life so that others may learn and build on the foundation that we have laid before them. I just wanted the opportunity for Clemente's story to continue building in the lives of others."

Anthony secured the Clemente clan's blessing last week following a series of discussions dating back to October of '08. The filmmakers will receive unprecedented access to the family, including interviews with wife Vera and sons Roberto Jr., Luis Roberto and Enrique Roberto. Clemente's sons are expected to serve as producers along with Anthony and his partners.

The Clemente film, which does not yet have a writer and is being pegged as a theatrical release, is only the latest development for Krossover. Their Tyson, an unflinching, warts-and-all portrait of the controversial former heavyweight champ, bowed to rave reviews at the Cannes and Sundance Films Festivals before being swooped up by Sony Pictures Classics earlier this year. Directed by James Toback (Black and White), the flick will be released theatrically on Friday in LA and New York before expanding throughout the country. 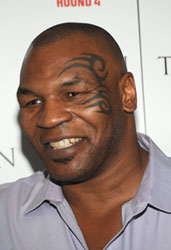 "What was missing in the journey and career of Mike Tyson was his voice, because we watched everything through the eyes of the media," Anthony says in the email. "Many people don't understand the circumstances from which Tyson came and the battles he faced to belong or survive. He'd be the first to admit that all of his choices weren't good ones, but I wanted to be a part of something that allowed for Tyson's truth to be seen."

Unfortunately, Anthony hasn't had much time to reflect on his accomplishments as a producer during playoff time. He was in Denver preparing for the playoffs when Tyson had its red carpet premiere in LA on Thursday. Vazquez attended in his place.

"As a company, we're so appreciative of our success right out the gate, and Melo's really bummed that he's not around to enjoy it," she said. "But he's so focused on the playoffs, on preparing for Chris Paul and New Orleans, it's amazing. He's so energized. I've never seen him this excited."

Vazquez feels Anthony's focus and recent play is in part a result of his experience producing Tyson. She says the two-time All-star, whose six-year career hasn't been without controversy, spoke regularly to Tyson throughout the filmmaking process about the boxer's own trials and tribulations, and has come away the better for it.

And what lessons can be learned from Tyson's tale?

"That timing is everything," the former champ says. "My timing wasn't good for me to become who I was at that time. If you're not humble, the world will thrust humbleness upon you. And I believe I've been humbled. I came from this megalomaniac, overconfident guy to now I'm like a hermit. Life has these twists and turns. It wasn't good timing for me."

But for Anthony, the baller and the producer, the timing is beginning to look just right.