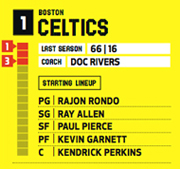 … the Big Three won't degrade into the big, fat and complacent?

Yes, winning banner 17 after a 22-year drought could cast an our-work-here-is-done lull over the Garden. But in a town where Bill Russell won 11 rings, one barely gets you a footnote in the media guide. Celtics immortality demands more. Besides, Coach Rivers can count on Rondo and high-flying adds Darius Miles and Bill Walker to energize KG and his pals should they begin to rest on their laurels. Face it, friends: The NBA's green initiative isn't going away.