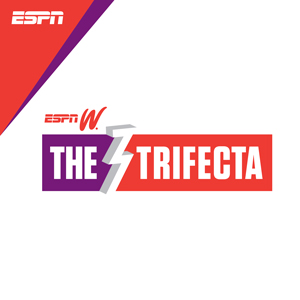 Sarah Spain and Kate Fagan break down sports from their unique perspectives.

Sarah Spain, Kate Fagan and Mina Kimes look at the Cavs-Celtics trade that could be rescinded, the issues surrounding Floyd Mayweather and preseason NFL and CFB.

Kate Fagan, Jen Lada and Chiney Ogwumike talk about the NFL CBA and how Le'Veon Bell wants to change it, Zeke Elliott's situation and changing names due to history.

Sarah Spain and Laura Rutledge looked at OBJ's claim that he wants to be highly paid, LaVar Ball, Laura's ballet days and her college football knowledge.

Sarah Spain, Kate Fagan and Dianna Russini discussed the Ole Miss problem, the vitriol around the WNBA and Kyrie Irving wanting to be traded.

Kate Fagan was joined by Jen Lada and D'Arcy Maine and talked about NBA free agency, tennis players getting honest and spoke with Tom Haberstroh and Spike Eskin from Philly.

Sarah, Kate and Jen talk with Ramona Shelburne and Adrian Wojnarowski about NBA free agency, give their top 3 sports movies and more.

Sarah Spain, Kate Fagan and Alyssa Roenigk look at more NBA Finals, LaVar Ball and speak with Jason Fitz on the Stanley Cup in the South and Jackie MacMullan on the NBA Finals

Sarah and Kate give their Finals observations, comment on ESPN Magazine's most famous athlete rankings, and talk to Shelley Smith about what the Cavs need to win.

Mike Golic Jr. fills in for Kate Fagan who jumped on the show to talk about being the commencement speaker at CU's graduation plus an NBA Game 7 and Jeter's number retirement.

Spain, Kate and Kavitha Davidson talk to Cassidy Hubbarth on the NBA, Howard Bryant on the Sox-Orioles strife and Top 5 shoes to wear.

Sarah Spain and Kate Fagan look back at the NFL draft and speak with Jeff Dickerson, Mo Egger and Aaron Goldhammer about their teams' efforts.

Sarah Spain and Kate Fagan look back at the NFL draft and speak with Jeff Dickerson, Mo Egger and Aaron Goldhammer about their teams' efforts.

Spain, Jane and Kate are back and talking about Blake Griffin's injury, the Cavs not playing up to what they used to be and Serena Williams' pregnancy.

Mina Kimes fills in for Jane and talks with Spain and Kate about Russell Westbrook's historical night, eSports taking over and Kate's plan to change the NBA.

Sarah, Kate and Jane talk to several women making history in sports and sports media in this espnW Special Broadcast.

April talks about competing in a sport where she wears a bikini. She discusses equal pay for men and women athletes.

Sue talks about how the WNBA is supported by a support network including the NBA.

Jemele talks about how important it is to break barriers.

Hilary Knight addresses the USWNT boycott and negotiations, and going public with their fight for equality.