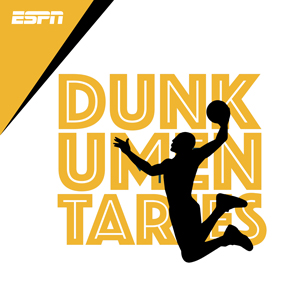 The dunk that launched a sneaker war. The first woman to throw down. These and more are the stories of ESPN's podcast mini-series.

When Celtic Dee Brown inflated his Reebok Pumps at the 1991 dunk contest, he ignited a sneaker war and the ire of Michael Jordan. Hosted by David Jacoby.

The 10-foot-high hoop led to the emergence of big men and dunking; dunking led to a rule change that would alter basketball forever. Hosted by Cari Champion & Roman Mars.

Video evidence of the first dunk in women's college basketball (1984) seemed to be lost forever, so an enterprising reporter set out to find it. Hosted by Kate Fagan.

In 2000, Vince Carter put down a dunk contest performance for the ages, inspiring a generation of young Canadian ballers. Hosted by Adnan Virk.

This year Zach LaVine and Aaron Gordon wowed everyone with their spectacular dunks... except host Kevin Wildes. Wildes and David Jacoby argue about the future of dunking.

Check out this sneak peak of 'Dunkumentaries', a new podcast series from ESPN devoted to the beauty and power of the slam dunk. Launching Tuesday, April 5.