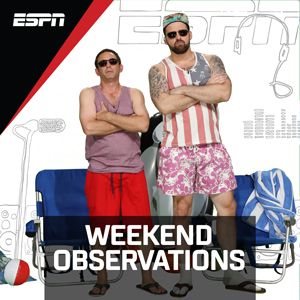 Stu and Gojo close out their final show with visits from Adnan Virk, Field Yates and former program director Louise.

Stugotz and GoJo talk to their first producer Stosh and give us GoJo on the last show to air.

Some actual sports talk as the guys discuss the game last night between the Celtics and Warriors. Damien Woody drops by and Stugotz phones in an important announcement.

Stugotz & Golic Jr made fun of Adnan Virk for him celebrating Roger Federer winning the Aussie Open. Plus the guys talked about the show Chopped

Stugotz and GoJo break in new guy Ryan and preview the conf. Championship games. Plus, some exclusive sound from the Jaguars rally.

Jaguar Matt calls in to defend the Jags and Tony Boselli talks O-Line shop with Gojo. Adam Schefter breaks down the NFL and the NBA

GoJo joins the show with his friend and Vikings TE Kyle Rudolph. Plus Stugotz gives a menu of hot takes

Stugotz is running solo for the first hour and going over the NFL playoff games on Saturday with Mike Golic Sr. and Field Yates talks NFL coaching openings and Twitter game.

Gojo and Stu react to the Saturday Wild Card games and talk with HOF Finalist Tony Boselli. Plus a conversation on the most depressing place for a meal

Peter Burns fills in for Stugotz and the guys discuss Grumours and the College Bowl Season.

What's worse than being a Browns fan? Maybe Mikey C's smoke break starring himself. Plus, Field Yates and Sam Ponder join the show.

Stugotz ends the first hour with an epic tease and the guys agree that Melo was booed last night. Plus, Field Yates joins the show.

Stugotz and Mike Ryan discuss what the Stanton trade means to Miami and Mikey C has a smoke break with Jalen Rose. Plus, Field Yates, Greg Cote and Sam Ponder join the show.

Mike Golic Jr. and Stugotz this week in CFB, the show staff is pro-Bama and Mikey C is pro-napping. Also, Marty Smith, Field Yates and Rece Davis join the show.

Mike Golic Jr. is joined by Ryan McGee to recap a crazy weekend in college football and discuss who should be in the top 4. Plus, Field Yates and Sam Ponder join the show.

Weekend Observations shares the trailer for Season Two of 30 for 30 Podcasts, launching November 14th, as well as one of our favorite episodes from Season One, The Fighter Inside.

Mike Golic Jr. and Stugotz discuss this year's World Series match up between the Dodgers/Astros and Mikey C spends more time at the Renaissance fair.

Mike Golic Jr. is joined by Barrett Jones to discuss to discuss Nick Saban's relationship withe media and the MLB playoffs. Plus, Field Yates and Sam Ponder join the show.

Mikey C takes ESPN's Adnan Virk down by the dumpster to for a special edition of Smoke Break.

Stugotz and Golic Jr. discuss Alabama's dominance and Mikey C gets called out by Maury Povich. Plus, Field Yates joins the show.

Stugotz and Golic Jr. discuss Melo being traded to OKC, Trump comments on NFL players & look back at Week 4 of College Football. Field Yates also joins the show and more.

A controversial boxing decision leads us to hear the epic SAS vs Teddy Atlas sound again. Staff ruins the show. And we replace Field Yates.

Jason Fitz fills in for Stugotz and Golic laments the Notre Dame loss.

Jason Fitz fills in for Stu. College football is back! Brock Osweiler is back (with the Broncos)! Gojo sings with Boys 2 Men! And Gojo & Mikey C's wedding date didn't go well.

Stugotz and Mike Golic Jr. break down the fight between Floyd Mayweather and Conor McGregor and then we hear an epic rant involving Teddy Atlas and Stephen A and more.

Stu and Golic Jr. are back and they discuss players protesting in the NFL. Plus, Jeremy Schaap and Mel Kiper Jr. read the best man speech. Domonique Foxworth joins the show.

Peter and Alexa Rosenberg are in for the guys today. The Rosenberg's dish on Ezekiel Elliott, Bryce Harper and ask callers to explain why their NFL team will be good, and more

Stugotz solo this week. He talks about Miami's QB situation, and speaks with Mike Reiss about Tom Brady. Then Gojo calls in to hear a smoke break and more best man speeches.

Jason Fitz and Marcus Spears in for the guys today. They discuss the Mayweather/McGregor pressers and then break down the upcoming CFB season with the help of Paul Finebaum.

Stu and Golic Jr. get into the excitement of NBA Summer League and then recap Mikey C Day. Adnan Virk also joins the show and of course another edition of Smoke Break!

Dari Nowkhah and Dan Dakich break down the stunning decision that saw Jeff Horn defeating Manny Pacquiao and they continue to break down NBA free agency.

The guys discuss Mikey C's depression over "Mikey C Day" not unfolding as planned, and GoJo spoons with Kyle Rudolph. Plus, Danny's Zzzzz and a "Beer Olympics."

Weekend Observations technical director Mikey C is throwing out the first pitch at the Hartford Yard Goats on June 28th. But what if he were at a Monster Truck Rally?

Weekend Observations technical director Mikey C will throw out the first pitch at the Hartford Yard Goats game on June 28th. ESPN is producing a 30 for 30 to celebrate.

The guys are back together and discuss the Celtics/Sixers trade, the Rick Pitino and Louisville situation and more. We also hear a new Smoke Break with Mikey C.

Peter and Alexa Rosenberg in for Stugotz and Golic Jr. What are the Cavs chances in game 5? They also talk about what sports teams their kids will support in their household.

Stugotz takes the reins of the show as GoJo is out this week. Stu gets into the NBA Finals, Tiger Woods' DUI and fighting in baseball. Also, another Smoke Break with Mikey C!

Dave Rothenberg in for Stugotz. Him and Golic Jr. preview the upcoming NBA Finals, Dave offers up his heartfelt reactions to his New York Mets and we talk to Antonio Davis.

Stugotz and GoJo talk about the dominance of the Warriors and Cavs, we hear back from the Yard Goats about Mikey C Day and we talk with Brian Windhorst about the NBA Playoffs.

Stugotz and Golic Jr. discuss and preview the ongoing NBA playoffs, talk with GoJo's mom on Mother's Day and we hear a new edition of "Smoke Break" and more!

Stugotz and Mike Golic Jr. talk about the ongoing NBA Playoffs and talk ESPN personalities most likely to attend a Renaissance Fair. Also, another edition of Smoke Break!

Stugotz and Golic Jr. recap all the action from the NFL Draft. The show also debuts "Smoke Break with Mikey C" and we talk with Marty Smith about his trip to Rome.

Stugotz and Golic Jr. react to the fantastic games in the NBA Playoffs, including the Grizzlies wild finish and look ahead to the great slate of games on Sunday.

Stugotz and Golic Jr. react to the first night of the NBA playoffs and try and rank the most attractive males at ESPN with the help of Adnan Virk.

It's Stugotz's favorite sporting event of the year in The Masters. We preview the final round with Michael Collins and the guys give their thoughts on the NBA resting issue.

The Final Four is set! Hank Azaria and Dan Dakich join the show and the crew has problems setting up clips all show long...

Fibbing Anthony Rizzo and sleeping in the loo: 3/26/17

Stugotz and Junior find out from Mikey C his favorite place to snooze in the house, Anthony Rizzo is all in on a video game and Purple is waiting for GoJo.

GOJO makes it to work this week! The guys rejoice Northwestern's loss & rip Chris Collins for his on-court meltdown. Stosh graduates from Stugotz's school of Fraudcasting.

Dari Nowkhah & Ryan McGee fill in for Stu & GOJO. Spurs clinch 20th straight playoff trip. MJ says "the ceiling is the roof" and no one knows what that means.

Adnan Virk joins to talk Oscars, Shaq and JaVale McGee have a Twitter spat, and Stugotz tells Syracuse basketball fans to be quiet.

GOJO forgot that the sun existed. Stugotz thinks old guys dunking on a 9 foot rim will fix the Dunk Contest. Nobody can fix the relationship between Russell and KD...

The guys discuss Kevin Durant's return to OKC and chat with Thunder reporter Royce Young to recap the night. They also have a great conversation with Patriots WR Michael Floyd