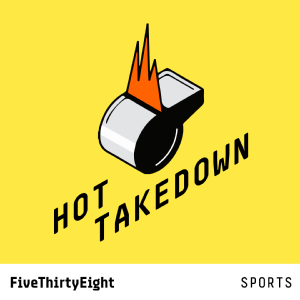 Hot Takedown is the weekly sports podcast from FiveThirtyEight. On it, the crew uses numbers to dissect the week in sports, taking down some silly hot takes in the process.

Hot Takedown discusses the Patriots newest MVP QB and the latest examples of athlete activism. Plus, a Rabbit Hole about pumping iron(s)

Hot Takedown discusses MLBs restart plan and how multiple leagues are coping with COVID-19. Plus, an NBA coaching Rabbit Hole.

Hot Takedown assesses the NFLs rapid evolution on player protests and the NBAs plans to reopen in Disney World. Plus, a Rabbit Hole on fake players.

Hot Takedown looks at the negotiations between MLB players and owners, and examines why golf has already made a successful comeback. Plus one last "Last Dance" Rabbit Hole.

Hot Takedown unpacks how truthful, and useful, the Michael Jordan docu-series is and debates some potential NFL diversity hiring incentives. Plus, a cricket-themed Rabbit Hole

Hot Takedown covers a new poll about what fans need to feel safe at live sporting events and discuss how it applies to the NBA. Then, an NCAA bribery Rabbit Hole, as a treat.

Hot Takedown talks to The Athletic's Meg Linehan about the latest news in the USWNT's lawsuit, and surveys which American leagues might be closest to reopening.

Hot Takedown covers the results of the NFL draft, Twitter drama about sports drafts, and a classic games Rabbit Hole.

Hot Takedown discusses where the NFL draft will get interesting, whats interesting about the new Michael Jordan documentary, and a rules-lawyering Rabbit Hole.

This week we discuss whether the president can help U.S. sports leagues restart and wrap up our NCAA tournament, then special guest Emily Scherer tackles the Rabbit Hole.

Hot Takedown talks about how the NBA might end its hiatus, the NCAA extending eligibility for student athletes, and an iRacing (i)Rabbit Hole.

Its been another big week of cancellations in sports, so the Hot Takedown team reacts to the postponement of the Olympic Games.

Hot Takedown looks at the effect of the coronavirus pandemic on both leagues and fans, and our Rabbit Hole remembers when sports were stopped in the past.

Last week, Nate Silver joined Hot Takedown on stage to discuss how RAPTOR has performed this NBA season. Plus, a Rabbit Hole on the unconventional way some players get paid.

Hot Takedown discusses the chaos in men's college basketball and who our model believes should be NBA Rookie of the Year. Plus, a Rabbit Hole from spring training.

In Sara's absence, Neil and Geoff discuss too much hockey and debate the merits of era adjusting records. The Athletic's Meg Linehan unpacks the latest in the USWNT lawsuit.

Changes to the NBA All-Star Game were well received but we have a few more ideas to improve the weekend. Plus, Manchester City's scandal and a Rabbit Hole on NFL dynasties.

A close look at the Chiefs' Super Bowl comeback, why the Red Sox might trade Mookie Bets and a Rabbit Hole on improbable brawls.

Our Super Bowl Special! What to expect from the 49ers and the Chiefs this Sunday, the next frontier of football analytics and a Rabbit Hole on an unconventional champion.

The Astros sign-stealing scandal is back in the headlines and we're still not convinced it's worth the hype. Our Rabbit Hole examines the limitations of the Rooney Rule.

The Titans pulled off the largest NFL playoff upset (according to Elo), social media is transforming how we cover the NBA and a Rabbit Hole on what the NHL is doing right.

The NFL had a genuinely wild, wild-card weekend and Joe Burrow may be the most efficient college quarterback ever. Plus, Vince Carter's unique role in the NBA.

Hot Takedown unpacks the evolution of statistics in the NBA.

An interview from the ESPN Daily podcast that featured FiveThirtyEight's Josh Hermsmeyer. Josh recently wrote about the resurgence of fullbacks in the NFL.

Hot Takedown develops a rubric for assessing cheating scandals. Plus, a Rabbit Hole on the impact of hockey superstars.

Did WADA's ban on Russia (but not its athletes) from global competition go far enough? A non-controversial College Football Playoff and the secret of the NFC West.

A deep dive into MLB free agency and how the Patriots shape the narrative of the NFL. Plus, a Rabbit Hole on the late Brad Gobright and the evolution of rock climbing.

Are the Astros cheating or is sign stealing just baseball as usual? Plus, chaos in the College Football Championship and a Rabbit Hole on the demise of iconic nicknames.

The role of analytics in load management and how we propose to fix the NBA regular season. Plus, recent NCAA eligibility decisions and a Rabbit Hole on rag-tag teens.

How Curry's injury affects the Warriors strategy and the merits of tanking across leagues. Plus, what to expect in college basketball and a Rabbit Hole on paper champions.

Our mid-season NFL check-in leads to a lively Super Bowl draft. The crew unpacks the Astros front-office scandal and our Rabbit Hole discovers another Rabbit.

It seems our NBA projections upset some pundits. On today's show, the crew backs them up, forecasts the World Series and argues over which rules the NFL should change.

The crew discusses allegations that MLB deadened the ball. Lyndsey D'Arcangelo joins to reflect on the WNBA season and a Rabbit Hole on Simone Biles and USA gymnastics.

Nate Silver dives under the hood of our new NBA metric: RAPTOR. Chris Herring joins to unpack the NBA/China controversy and a Rabbit Hole on the Twins.

This week, the show reflects on a season of extremes in MLB and an eventful first month of college football. Our Rabbit Hole defends a disrespected St. Louis Blues.

How the NBA's new tampering rules will affect the league. What to watch for in the final week of MLB regular season and a Rabbit Hole for Survivor fans.

The lasting impact of quarterback injuries from the NFL's second weekend. Lyndsey D'Arcangelo joins to discuss the WNBA Playoffs. Our Rabbit Hole marks the end of an era.

Hot Takedown reacts (but not overreacts) to Week 1 of the NFL season and break down what happens now with the Antonio Brown situation. Plus, a Rabbit Hole on Wes Helms?

A preview of our 2019-20 NFL prediction model and Kent Blackstone from the Atlantic League joins to discuss new tech headed for MLB. A Rabbit Hole tribute to fight songs.

A breakdown of young players dominating the MLB, a look ahead to the 2019 college football season and a Rabbit Hole on the Little League World Series.

Hot Takedown unravels the logic behind fantasy football and weighs potential outcomes for the 2019-20 EPL title race. Plus, a Rabbit Hole on historic baseball upsets.

A better approach to EPL Fantasy, the density of champions in the WNBA, a search for NASCAR road course ringers and an appreciation for X Games events, past and present.

Hot Takedown looks at the MLB trade deadline and Lyndsey D'Arcangelo from The Athletic joins to discuss the WNBA. Plus, a Rabbit Hole on temper tantrums.

The role of analytics in the depreciation of NFL running backs and a Rabbit Hole that might make you wary of your ballpark seat assignment.

Nate Silver joins to discuss our 2019-20 NBA model. We look ahead to the British Open and dive into the unlikely tie break scenarios at Wimbledon and the Cricket World Cup.

The team assesses the MLB All-Star Game and is joined by Travis Sawchik to discuss his new book, The MVP Machine. Plus, a Rabbit Hole on New York ticker-tape parades.

This week, Hot Takedown discusses all the drama around NBA free agency, the merits of competitive eating and changes to World Cup scoring.

This week our crew looks at the quarterfinal matchup between the USA and France in the Women's World Cup, NBA free agency and a Rabbit Hole into sports boardgames.

We dive into the hottest takes of the NBA finals and analyze our Women's World Cup model. In the latest edition of "Get Off My Field", Sara demands more glowing objects.

Hot Takedown discusses the upsets in the women's French Open and the strategies of the convoluted MLB draft, and our Rabbit Hole champions the Women's College World Series.

Nate Silver joins to discuss why our model favors Toronto in the NBA Finals. Plus, Tottenham's improbable road to the Champions League final and a Rabbit Hole on figurines.

Hot Takedown talks to author Caitlin Murray about USWNT's lawsuit for equal pay in advance of the Womens World Cup. Also, we get lost in disastrous baseball.

This week, Hot Takedown evaluates the NBA and NHL conference finals. Plus, our Rabbit Hole tracks the players who made the most rosters over their careers.

The crew examines promising performances by the Red Sox and a tight Premier League title run with Mike Goodman of StatsBomb. Plus, our Rabbit Hole explores good luck totems.

Nate Silver joins the podcast to talk about the second round of the NBA playoffs. We also discuss Kyler Murray and the NFL draft and Nate rants about home runs in the MLB.

The Hot Takedown team gathers to assess upsets in the NBA playoffs, Tigers historic win at the Masters and our Rabbit Hole dives into other great comeback stories.

Hot Takedown gathers to discuss the end of March Madness and debate who will become the NBA MVP. Plus, it's Masters week and our Rabbit Hole goes back to 1908.

Our upload earlier this week made Geoff sound like he was in a tunnel of sound. This fixes that. We talk NCAAM, MLB opening weekend, and our Rabbit Hole of the week.

Hot Takedown is buzzing with reactions to the March Madness Final Four. Plus, MLB opening weekend brought surprises and our Rabbit Hole of the Week has us feeling old.

The Hot Takedown crew reacts to a flurry of MLB extensions and make our predictions for the season. We debate NBA prospects for Williamson and Morant, plus an ode to Gronk.

Hot Takedown is back! This week, we tackle Antonio Brown's trade to the Raiders, the Mets going for it in the NL East and our Rabbit Hole of the week.

The podcast where the hot sports takes of the week meet the numbers that prove them right or tear them down.