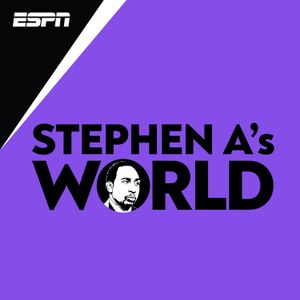 A weekly compilation of the best interviews from Stephen A's World, hosted by Stephen A. Smith, with full episodes including four new episodes a week streaming exclusively on ESPN+.

Stephen A. chats with CNN's Don Lemon about his new book, "This is the fire". Next is gospel singer Kirk Franklin and we get into his new podcast and his musical career. Finally, country singer/songwriter Brandy Clark discusses her career and love for basketball

Stephen A. chats with ABC's Linsey Davis about her new book and social injustices going on. Then, Michele A. Roberts the Executive Director of the NBPA talks about the impact the players had on and off the court this past year and a whole lot more. Finally, twin sisters Jocelyne Lamoureux-Davidson & Monique Lamoureux-Morando discuss their new book.

Stephen A. chats with Guy Fieri about what COVID-19 has done to the food industry and what he's trying to do to keep restaurants from closing. Then, Michael Ealy chats about his role in Fatale and he doesn't like the Cowboys so you know that had to be discussed. Finally, film and TV producer Will Packer stops by

Stephen A. Smith is joined by former WNBA star and now vice president and co-owner of the Atlanta Dream Renee Montgomery. Renee talks about what the road to being a part owners has been like and her drive to turn the Dream into Champions. Then, 24KGoldn talks about his road to stardom, dropping out of USC and more. Finally, Fat Joe discusses his career and of course gets into the NBA.

Stephen A. Smith is joined by Matthew McConaughey as he chats about writing his new book and what he learned about himself along the way. Then, Kevin James chats about his show on Netflix and then gets into what life is like as a Mets and Jets fan. Finally, the one and only Ice Cube joins the show.

Stephen A. Smith is joined by Jamie Foxx as he talks about his new project on Disney Plus, Mike Tyson and more. Then, Deion Sanders joins the podcast to discuss why he decided to coach at Jackson State and what he is trying achieve. Finally, Wayne Brady chats about his new show and what life has been like during the pandemic

Stephen A Smith is joined by Snoop Dogg as they get into what projects he's working on, the spirit of the Lakers and more. Then, Chris Rock talks about the Nets' big three and his thoughts on the New York Knicks. Finally, Desus and Mero discuss how they went from podcast to hosting a late night tv show.

A weekly compilation of the best interviews from Stephen A's World, hosted by Stephen A. Smith, with full episodes including four new episodes a week streaming exclusively on ESPN+.