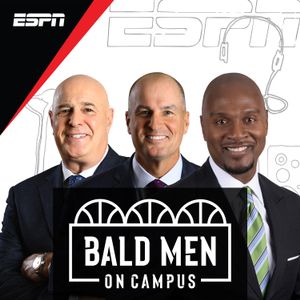 From the early-season tournaments to the crowning of a champion, ESPN's Seth Greenberg, Jay Bilas, and LaPhonso Ellis bring you previews and analysis of the biggest games, and conversations with the biggest names in Men's College Basketball. Whether you're a fan of a Blue Blood, a Mid-Major, or a Cinderella, Bald Men on Campus is your all-access pass to all things college hoops.

Jay Bilas, LaPhonso Ellis and Seth Greenberg discuss their takeaways from the Big Ten-ACC challenge, the top-two tiers of teams in the country, and if anyone wanted to win between N.C. State and Syracuse. Then, Ohio State head coach Chris Holtmann stops by to talk about upsetting No. 1 Duke, his teams resiliency against the Blue Devils, a polite court storming, his daughters singing recital and his hair. Later, the guys look ahead to the Jimmy V Classic.

Jay Bilas, LaPhonso Ellis and Seth Greenberg preview Fridays matchup between basketball royalty: Duke and Gonzaga. The guys discuss the last time these teams played, Gonzagas historic offense, Paolo Banchero vs. Drew Timme, if Duke can put pressure on the Zags and the Blue Devils need to score to keep pace. Plus, they share their takeaways from Feast Week and chat about their time in Las Vegas.

Jay Bilas, LaPhonso Ellis, and Seth Greenberg discuss Duke's handling of the DWI-related charges involving star freshman Paolo Banchero and Michael Savarino, whether or not fans of Illinois or Michigan should be worried about recent losses, and then they look ahead to Feast Week matchups at the Maui Jim Maui invitational, the Bad Boy Mowers Battle 4 Atlantis, and more.

Jay Bilas, LaPhonso Ellis and Seth Greenberg discuss the Champions Classic, what it was like being back at a college basketball game with fans in the stands, Michigan States turnover problems, Kansas appearing to be ahead of schedule and if Duke ultimately has a higher ceiling than Kentucky. Then, the guys talk about other opening night action including Ohio State nearly losing to Akron, Navy sinking Virginia, Tennessee jacking up threes and Memphis ball movement. Later, they preview UCLA-Villanova and Texas-Gonzaga.

Jay Bilas, LaPhonso Ellis and Seth Greenberg lead off the show with Phonz showcasing how he eats candy bars, Seths observations after trips to East Lansing and Blacksburg, and looking ahead to the Champions Classic. Then, the guys discuss the outlook for the American Conference, the A10, the Missouri Valley, the West Coast Conference, the Mountain West and more.

Jay Bilas, LaPhonso Ellis and Seth Greenberg lead off the show talking about how the "old" teams in college basketball are going to dominate the conversation, as opposed to one-and-dones, and the impact of older players jumping from mid-majors to high-major programs. Then, the guys preview the SEC and highlight the loaded upper tier of the league with Kentucky, Alabama, Arkansas and Tennessee. Later, they preview the Big East and discuss how they conference may be down compared to last year. Plus, a startling revelation about how Phonz eats candy bars and a look at projected win totals for the top teams in the SEC.

Jay Bilas, LaPhonso Ellis and Seth Greenberg lead off the show voicing their support for Dick Vitale following his recent cancer diagnosis. Then, Seth shares what hes seeing while visiting practices around the country, and they talk about the modern college basketball offense. Later, guys preview the Big Ten and discuss Mike Woodsons transition to college basketball, Illinois not taking a step back, which teams are Final Four contenders and if the conference can find its grit. Later, they preview the Pac-12 and discuss UCLAs national title aspirations, Tommy Lloyd landing at Arizona, and if theyre buying USC, Arizona State or Colorado. Plus, Seth meets Nick Saban.

In the first episode of Bald Men on Campus, Jay Bilas, LaPhonso Ellis and Seth Greenberg preview the ACC and Big 12. In the ACC, they get into how the conference killed it in the transfer portal, people sleeping on Notre Dame and Louisville, Mike Brey as the Ted Lasso of college hoops, Hubert Davis taking over for Roy Williams, Virginia Techs front court, and Mike Krzyzewskis final season at Duke. Then, in the Big 12, the guys discuss Chris Beard dumping Texas Tech for Texas, how Beard completely overhauled the Longhorn roster, why they think Kansas will have a different grit this season and their confidence in Bob Huggins to retooling West Virginia.

From the early-season tournaments to the crowning of a champion, ESPNs Seth Greenberg, Jay Bilas, and LaPhonso Ellis bring you previews and analysis of the biggest games, and conversations with the biggest names in Mens College Basketball. Whether youre a fan of a Blue Blood, a Mid-Major, or a Cinderella, Bald Men on Campus is your all-access pass to all things college hoops.