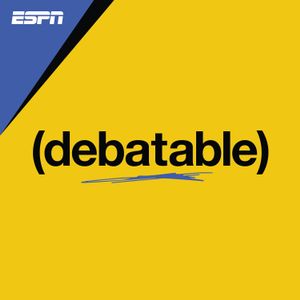 Welcome to the (debatable) podcast, the audio version of the digital-exclusive series available across ESPNs Twitter, Facebook and YouTube channels as well as the ESPN App. (debatable) is led by a rotating team of signature voices, taking on the most compelling topics from around the sports world. New 45-60 minute episodes will be available every weekday.

Pablo Torre, Bill Barnwell and For The Win's Charles McDonald debate if hiring Nathaniel Hackett makes you think the Broncos can lure Aaron Rodgers to Denver and if the Nets need to be more open to trading James Harden before he can opt-out this summer.

Israel Gutierrez, Clinton Yates and Joon Lee debate the meaning of Aaron Rodgers comments about his future and if it was fair to them that Barry Bonds was left out of the Hall of Fame while David Ortiz got in.

Israel Gutierrez, Mike Golic Jr. and Cassidy Hubbarth debate what to make of Tom Bradys cloudy NFL future and if the 76ers would be crazy to hold onto Ben Simmons until the offseason.

Greatest Divisional Round Ever Reaction: 1/24/22

Pablo Torre, Elle Duncan and Domonique Foxworth debate their confidence level in the Rams after the team blew a 27-3 lead and if they put the blame for the Packers loss on Aaron Rodgers.

Pablo Torre, Domonique Foxworth and Mina Kimes debate if they think Kyle Shanahan can scheme up a way for the 49ers to beat the Packers and if they have any faith in the Rams to take down the Bucs.

Pablo Torre, Bill Barnwell and Clinton Yates debate how the benching of Russell Westbrook will impact the Lakers moving forward and if the Raiders should hire Jim Harbaugh.

Israel Gutierrez, Clinton Yates and Joon Lee debate if Daryl Morey and the 76ers are being too picky with the Ben Simmons deals and if Jim Harbaugh should stay at Michigan or bolt back to the NFL.

Pablo Torre is joined by For The Win's Charles McDonald and the Ringer's Kevin Clark to debate who deserves the most blame for the Cardinals performance last night and where they want to see Russell Wilson play next year.

Pablo Torre, Mike Golic Jr. and Domonique Foxworth debate who deserves the most blame for how the Cowboys season ended and if they will view the Rams' season as a failure if they lose to the Cardinals tonight.

Pablo Torre, Mina Kimes and Domonique Foxworth debate if the Pats can upset the Bills tomorrow and if the Bucs or Chiefs are more of a favorite to return to the Super Bowl this year.

Pablo Torre, Mike Golic Jr. and Cassidy Hubbarth debate the significance of Cam Reddish being traded to the Knicks and if the Lakers should cut bait with Russell Westbrook.

Israel Gutierrez, Elle Duncan and David Jacoby debate if they are with Ja Morant when he says the Grizzlies are one of the best teams in the league and how desirable the Giants coaching job is.

Israel Gutierrez, Clinton Yates and Joon Lee debate if Bryce Young right to blame himself for Alabamas loss and if we need to start viewing the Grizzlies as a real threat in the West.

Pablo Torre, Domonique Foxworth and Bill Barnwell debate how the Raiders and Chargers handled the end of their game last night and if they learned more about the Rams or 49ers yesterday.

Pablo Torre, Mina Kimes and Domonique Foxworth debate what they think of the 49ers chances against the Rams this weekend and if last night was a significant moment for the Knicks or if the Celtics just stink.

Clinton Yates, Israel Gutierrez and Monica McNutt discuss the Nets becoming the odds-on favorites to win the title and what they expect from Klay Thompson and the Warriors when he returns this weekend.

Pablo Torre, Elle Duncan and Israel Gutierrez debate if they see Jim Harbaugh bailing on Michigan to return to the NFL and what they make of Aaron Rodgers comments implying that his vaccination status could cost him the MVP.

Clinton Yates, Joon Lee and Israel Gutierrez debate if last night was the last time we will see Baker Mayfield in a Browns uniform and if Cooper Kupp is right that any records broken this year deserve an asterisk because of the extra game.

Pablo Torre, Domonique Foxworth and Mike Golic Jr. debate their thoughts on Antonio Browns meltdown and if they learned more about the Bengals or the Chiefs yesterday.

Whether you love him or hate him or are somehow completely indifferent, youve probably spent at least some of the last 20 years thinking about Tom Brady. Brady has altered friendships, families and communities. Hes changed the trajectory of careers and reputations, enabled fairy tale dreams to be both realized and dashed. 'Man In the Arena' is a new 10-part series from ESPN and Religion of Sports that looks at those two decades of Brady through the eyes of the fans and the haters, those in the arena and those outside. Host Gotham Chopra grapples with these big themes, while grounding the podcast in his personal relationship with Tom and his journey from a Brady fan to Toms friend. Using Bradys improbable comeback against the Falcons, and all his other come-from-behind victories, this episode looks at the role probability plays in our lives. Listen on Apple Podcasts (https://apple.co/3FgQalz), Spotify (https://spoti.fi/3c6q4oB), or search "Man In the Arena" wherever you're listening now.

Pablo Torre, Domonique Foxworth and The Ringer's Kevin Clark debate who deserves the most blame for the way the Seahawks season has gone and if LeBron is right that we cant assess this Lakers team yet.

Pablo Torre, Clinton Yates and Domonique Foxworth debate if the NFL and NBA should follow the NHL and press pause on their seasons and their biggest takeaways from last nights football games.

Pablo Torre, Israel Gutierrez and Mike Golic Jr. debate how alarming last nights loss was for the Bucs and if we can safely say the Cardinals are frauds now.

David Jacoby, Domonique Foxworth and Monica McNutt discuss how they will remember the Urban Meyer era in Jacksonville and if the Pelicans-Thunder game was the game of the year in the NBA.

Israel Gutierrez, Sarah Spain and Bill Barnwell debate if the reaction to Steph Currys 3-point record was a bit of overkill and if it is finally time for the NFL to do something about Daniel Snyder.

Pablo Torre, Bill Barnwell and Israel Gutierrez discuss if the Cardinals are as good as we thought they were after losing to the Rams and talk how leagues should respond to surging COVID cases.

Pablo Torre, Domonique Foxworth and Mike Golic Jr. debate if the Bills should feel more or less confident after their overtime loss to the Bucs and if the Jaguars should fire Urban Meyer before the season ends

ESPN's Pablo Torre and Mina Kimes are joined by The Ringer's Kevin Clark to discuss how much blame should we give Chase Claypool for ending the Steelers comeback chances and if they trust the 49ers or the Bengals more.

Clinton Yates, Israel Gutierrez and Bill Barnwell discuss what kind of chaos the Washington Football Team can cause in the NFC East if they beat the Cowboys this weekend before talking if it is a big deal that Luka showed up out of shape this season.

Pablo Torre, Mike Golic Jr. and For The Wins Charles McDonald discuss a wild week of Notre Dame Football headlines for GoJo and where the Ravens stand in the AFC.

Welcome to the (debatable) podcast, the audio version of the digital-exclusive series available across ESPNs Twitter, Facebook and YouTube channels as well as the ESPN App. (debatable) is led by a rotating team of signature voices, taking on the most compelling topics from around the sports world. New 45-60 minute episodes will be available every weekday.