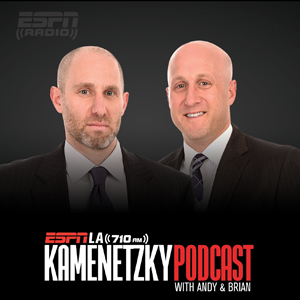 Andy and Brian Kamenetzky talk Lakers, NBA, movies, TV, and anything else that comes to mind.

ESPN LA: Kamenetzky Podcast (HR 2) What will the atmosphere be like tonight at Staples Center? : 1/31/20

What will the atmosphere be like tonight at Staples Center? Also, Keyshawn Johnson calls in to talk about Super Bowl 54 and a prediction! Plus, the guys make their Super Bowl Prop bets! and What can we expect from the Lakers at the NBA trade deadline?

The Lakers practiced a bit of football and soccer yesterday, as things begin to get easier after the passing of Kobe Bryant. Also, remembering Kobe's sense of humor the guys play some of his commercials. Plus, Ramona Shelburne calls in to talk about the Lakers vs. Portland game tonight.

Andrew Bernstein long time NBA photographer calls in to share his Kobe Bryant memories. Also, a new set of rules are set for the NBA All-Star game, the guys go over them. Plus, Kirk Morrison calls in from Miami for Super Bowl 54! And a tweet cost a company 200 million dollars?

Jeannie Buss issued a statement on Instagram for the first time after Kobe's death. Also, what will the Lakers do with the NBA Trade Deadline coming up? How difficult will it be for Rob Pelinka? Plus, Will the Dodgers have the same team as 2019 heading into the 2020 season?

Bill Oram who covers the Lakers for the Athletic calls in to talk about the mood of the Lakers yesterday in El Segundo. Also, the Lakers first home game after Kobe's death is this Friday. What will the mood be like? And the guys take a look at Super Bowl 54!

What was Kobe's involvement in projects outside of basketball? Also, LeBron James spoke yesterday in a team gathering after Kobe's passing. Plus, Chris Raih co-founder with Kobe Bryant of Ad Agency Zambezi tells us stories of Kobe Bryant as a businessman.

Remembering Kobe Bryant. The guys look back at the commercial when Kobe jumped over an Aston Martin and how viral that was. Reflecting on how Kobe passed away, you realize that he was being a dad. Plus, Kobe would reach out to those he admired and learn from them.

A look back at Kobe's final game, scoring 60 pts. and what it meant re-watching it. Also, the guys open the lines for the people as there are a ton of stories about Kobe Bryant. Plus, how did Kobe make connections to those he admired?

More reaction on the passing of Kobe Bryant. ESPN's Zach Lowe came on to talk about Kobe's greatest moments. And, the Athletic's Sam Amick came on with his greatest Kobe memories.

Jorge stuck around with the Kam Brothers to chat about Kobe's influence on today's NBA. The Undefeated's Marc Spears came on with how shock he is with the news of Kobe's passing. And, calls, as fans remember the life of Kobe Bryant.

The Kamenetzky Brothers hosted a special program remembering the life of Kobe Bryant. Our old friend J.A. Adande called in with his best memories of the "Black Mamba." Also, our own Jorge Sedano and ESPN's Ramona Shelburne came on to talk about how Kobe affected their lifes.

Andy and Brian discuss the Lakers' off-season moves and the state of the roster.

Andy & Brian continue to react to Kawhi Leonard & Paul George returning to LA to play for the Clippers. After the Lakers were able to land Antohny Davis to play with LeBron, did they still end up losing free agency after what the Clippers pulled off? Who are the favorites now in the Western Conference for the NBA going into this season? ESPNs Ramona Shelburne joins to bring down how we got to this point.

Andy & Brian are reacting to the shocking news that Kawhi Leonard has agreed to join the Clippers after the team has also agreed to trade for Paul George to create another title contender in LA. ESPNs Ohm Youngmisuk and Bill Oram of The Athletic jump on to break down the news and where the Lakers go from here.

Andy and Brian discuss the needs and stakes for the Lakers with free agency about to kick off.

Andy & Brian continue to break down the trade that has brought Anthony Davis to the Lakers and shipped out most of the young core. Zach Harper of The Athletic jumps on to discuss how this trade affects the landscape of the NBA. Also, ESPNs Ohm Youngmisuk stops by to discuss LaVar Ball's response to Lonzo being traded to the Pelicans.

Andy & Brian Kamenetzky are reacting to the NBA landscape shifting with the trade of Anthony Davis to the Lakers. They talk with William Guillory of The Athletic to get the Pelicans side of this trade and where that franchise goes from here. Also, ESPNs Dave McMenamin jumps to discuss the LeBron James side of the trade and who the Lakers could target in free agency?

Andy and Brian talk with Pete Zayas (@LakerFilmRoom) and try to make sense of the Ty Lue debacle.

Andy talks with director Dexton Deboree about his upcoming documentary "Unbanned: The Legend of AJ1."

Andy and Brian break down the Lakers coaching search, and the brain-trust behind it. Plus, should the NBA rethink the 3?

Andy and Brian react to Magic Johnson sudden resignation and where the Lakers go from here.

The Lakers are hanging by a thread. Can they turn it around in time? What went wrong, and what comes next? Plus, too much food!

Anthony Davis is still a Pelican (for now). What's next? Are Magic and Pelinka ready for a critical summer?

Andy and Brian talk with The Athletic's Pete Zayas about the Lakers' recent struggles and the development of Lonzo Ball and Brandon Ingram.

Andy and Brian discuss the injuries to LeBron James and Rajon Rondo, how the kids need to step up, and Anthony Davis trade rumors.

Andy and Brian discuss the Lakers' strong homestand and Kevin Durant's thoughts on playing with LeBron. Plus, the annual Hallmark Christmas movie game!

Andy & Brian discuss the state of the Lakers after nearly 20 games and how the kids are faring alongside LeBron.

Andy and Brian make predictions on all things Lakers and the NBA!

Andy and Brian talk about Lonzo Ball's return to action, the challenges for Luke Walton, and the Jimmy Butler drama.

Andy and Brian talk all things LeBron and the Lakers.

Brian and Andy Kamenetzky are live from the UCLA Health Training Center as the Lakers wrap up the 2018 NBA Draft. They are joined by Lakers General Manager Rob Pelinka fresh off his press conference and head coach Luke Walton.

Brian and Andy Kamenetzky are live from the UCLA Health Training Center as the NBA Draft rolls through. Lakers first round selection Moritz Wagner calls in to discuss his emotions in joining the Lakers. The guys are joined by ESPN Lakers reporter, Ohm Youngmisuk, and Lakers sideline reporter, Mike Trudell.

Brian and Andy Kamenetzky are live from the UCLA Health Training Center as they prepare for the Lakers first round selection. The announcement of the newest Laker. Ramona Shelburne joins them to discuss the Lakers draft pick and the ongoing offseason rumors surrounding Kawhi Leonard, LeBron James, and Paul George.

Andy and Brian talk with The Athleticâs Bill Oram about the Kawhi Leonard trade rumors, and the importance of this summer for the Lakers.

Andy and Brian talk about the Warriors' greatness, Durant's disillusionment, LeBron the (unloved?) Laker and the death of Anthony Bourdain.

What happens to LBJ when the Finals are over? Plus, Colangelo's burners and LiAngelo's Draft workout.

Andy & Brian discuss Julius Randle's future, who's most and least untouchable among the Laker kids, and the upcoming 'Solo' movie.

Dodgers pitching from Koufax to Kershaw: 5/9/18

Andy and Brian talk with Jon Weisman about his new book "Brothers in Arms: Koufax, Kershaw and the Dodgers' Extraordinary Pitching Tradition."

Andy and Brian discuss the Kawhi Khaos, whether the Lakers should still covet Paul George and LeBron's amazing playoff run.

Andy Kamenetzky talks with writer Jonathan Abrams about his new book, "All The Pieces Matter: The Inside Story Of The Wire."

Andy and Brian discuss Isaiah Thomas, LaVarâs & Lonzoâs relationship with the Lakers and the 25th anniversary of âGroundhog Day.â

Andy and Brian react to the Lakers trading Jordan Clarkson and Larry Nance Jr., plus the rest of the deadline action.

Andy and Brian discuss Lonzo's health, whether the Lakers have a strong enough culture for LeBron, and the Blake Griffin trade.

Andy and Brian discuss Luke Walton's performance, the state of the Cavs and Thunder, Kobe's Oscar nomination and the 'Three Billboards' backlash.

Andy and Brian discuss Paul George, Lakers fans' confidence in Luke Walton and the front office, and a song welcoming the Ball brothers to Lithuania.

Andy & Brian talk with ESPN writer Kevin Arnovitz about Lonzo Ball's potential and skillset, plus the 35th anniversary of the film 'Tootsie'.

Andy and Brian break down the road trip, Lonzo's improvement, LBJ to LA, and dive deep into Star Wars.

Andy and Brian talk with director Chris Smith about his documentary 'Jim and Andy,' about Jim Carrey, Andy Kaufman and the making of 'Man on the Moon.'

Andy and Brian discuss Lonzo's shot, the politics of playing time, and how the 2018 plan is looking.

Andy and Brian discuss the Lakers' preseason, the Lonzo effect, Tom Petty and the Rock & Roll Hall of Fame.

Andy and Brian Kamenetzky talk tampering, the Kyrie-Isaiah trade and give Joe Smith a statue for his service with the Los Angeles Lakers.

What does Kyrie Irving's trade demand mean for LeBron-to-L.A.? Plus KCP, Derrick Rose, and OJ gets paroled.

Andy and Brian Kamenetzky discuss the Los Angeles Lakers getting the #2 pick and whether they'll draft Lonzo/LaVar Ball.

Andy and Brian talk with ESPN's Dave McMenamin about LeBron, the Cavs, the playoffs and his new book 'Return of the King.'

Andy and Brian talk with Tabitha Soren about photography, media, Tupac, and her new book, "Fantasy Life, Baseball and the American Dream."

Kamenetzky on sports and entertainment : 4/17/17

Andy and Brian Kamenetzky talk with comedian W. Kamau Bell about race, the Warriors, Denzel and his CNN show "United Shades of America."

Andy and Brian Kamenetzky discuss the Buss family's battle for ownership of the Los Angeles Lakers.

Andy and Brian discuss the Deng and Mozgov demotions, Magic rejoining the Lakers, Phil versus Melo and Oak versus Dolan.

Andy and Brian Kamenetzky discuss the Lakers at the halfway point, the core kids' potential and the Kyle Korver trade.

Brian & Andy continue discussing the split of Phil & Jeanie while also getting into Luke Walton taking the blame for the Lakers' loss to the Utah Jazz. The guys wonder just how much learning Luke still needs to do as a head coach. Also, when is it ok to give shotguns as a Christmas gift?

Will Jim Buss be back after this season and could Jerry West re-enter the Lakers picture? Plus, Andy and Brian Kamenetzky explain how Phil and Jeanie's separation could affect the Lakers moving forward.

With a quarter of the season gone, Andy and Brian Kamenetzky breakdown the Lakers fast start, Brandon Ingram's future and Luke Walton's impact.

Andy and Brian Kamenetzky break down a surprising early season start for the Los Angeles Lakers and dig into the new season of, "The Walking Dead."