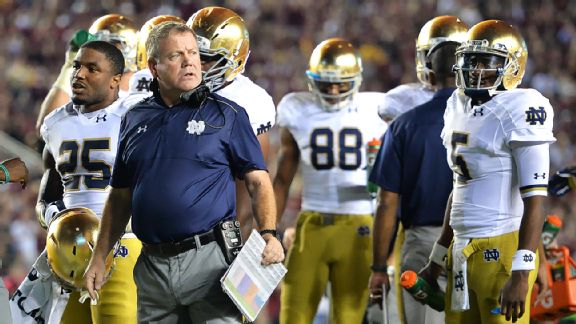 Scott Clarke/ESPN ImagesNotre Dame coach Brian Kelly talks about how an Ohio State victory would be good for the Big Ten conference.

Thursday, Scott Van Pelt and Ryen Russillo discuss the best open position in the NFL, preview the College Football Playoff National Championship and much more. Listen to the best highlights of the show below!

Notre Dame coach Brian Kelly talks about the impact an Ohio State win could have on the Big Ten conference, his desire to stay in college football and more. Listen

PTI's Michael Wilbon shares his thoughts on the NFL playoffs and whether or not LeBron James made the right decision by returning to Cleveland. Listen

BEST OF SVP & RUSSILLO ON ESPN RADIO: SHOW IN REVIEW