A taste of Greeny and Golic's book, "Mike and Mike's Rules for Sports and Life"

RULE 7.19: Write a book with someone who has never even read one. It makes you seem smarter.

So says Mike Greenberg, who should know. He and ESPN Radio partner Mike Golic have just penned "Mike and Mike's Rules for Sports and Life," a collection of musings that plot a path to fan nirvana. Below, a sample of their wisdom. 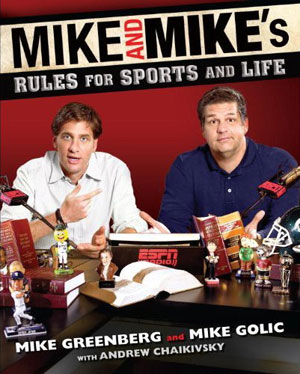 On being the MLB Commish

One of 12 rules Greeny would install on becoming baseball's big man:
No soup. I applaud the culinary innovations that stadiums have made in their concession menus. But selling soup at the ballpark? No way. Look, I like a good bowl of soup. I also like baseball. But soup and baseball just don't go together, and under no circumstances will I allow any major league ballpark to sell soup. You don't go to a baseball game and get soup. Never in my life have I heard anyone say, "Let's go to the ballpark and get a nice bowl of mushroom barley." It just doesn't work that way.

GREENY: It deserves mention that, on the day before I was scheduled to throw out the ceremonial first pitch at a Cubs game, I was in a surgery room in the hospital with an injury that would have landed any ballplayer on the 15-day DL.

GOLIC: Did you have Tommy John surgery?

GREENY: Almost. I had a small, benign cyst drained from under my arm.

On inducting current players into the Hall

GREENY: Each sport's Hall of Fame is nothing more than a museum. Do you think the Louvre and the Met had to wait five years after Picasso died before they could hang his stuff? For some current players and coaches, induction into the Hall is a stone- cold, lead-pipe lock. So what are we waiting for? Peyton Manning? Hall of Famer. Vote him in already. Same with Tom Brady, Adam Vinatieri and Randy Moss. Just imagine the marketing perspective that the leagues could exploit and that fans would cherish: "Tonight on 'Monday Night Football': Three Hall of Famers on the field at the same time!"

GOLIC: Don't you have a mitt at your house?

GREENY: I don't know what became of the mitt I owned when I was a kid. Somewhere along the line, I managed to lose it.

GOLIC: How can you not have a mitt in your house? A house without a baseball glove is not a home. Even better is two mitts -- someone comes over, you grab the mitts and go play a game of catch in the backyard. That's a nice thing to do.

On their six-word essay contest

• This makes procrastination very, very easy.
• Mike's right, and Mike is wrong.
• Six words are four too many.

GOLIC: I really like "Mike's right, and Mike is wrong." Sums up the discussion perfectly.