Now Walsh Jennings, 37, is playing with April Ross. And even though Walsh Jennings had regained her winning form before, the injury presented Ross, 33, with a real dilemma. Ross had earned a silver medal in 2012, but she had just lost half of her 2016 team -- and the best player in the world -- when it seemed to matter the most. 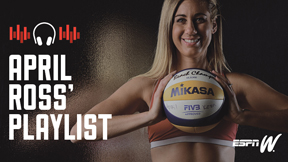 Ross stayed sharp by competing with new partners at the end of last season, then took October and November off as she normally would during the offseason. And this past week, she finally resumed training with Walsh Jennings in Los Angeles. "It doesn't even feel like we've taken that much time off," Ross said Friday. "The only thing that we are trying to be smart about is the number of swings that [Kerri's] taking. She's still working on her left hand a bit to give her right arm some rest during some reps. But otherwise, we're doing everything full speed

"At this point, I feel really good about us," she added. "I don't really have a concern right now. If none of this had happened last year with Kerri getting hurt, I think I'd feel the same way."

To qualify for the Rio Olympics, the pair must play at least five more tournaments before June 12 (there are 11 to choose from). They also must be one of the top two ranked U.S. teams on June 13 and rank high enough internationally to make the cut. So the points race is on, and the pair will return to the FIVB tour March 8-13, at the Grand Slam event in Rio de Janeiro, Brazil. It's a stressful time, but Olympic qualifying seems doable, though not necessarily easy.

In the meantime, Ross took a moment to explain how she copes with the uncertainty, and deals with a setback that threatens her athletic dreams.

Did you and Kerri talk daily during her recovery? How did you keep tabs on her progress?

No, I don't talk to anybody every day except my husband. If she had a milestone in her recovery, she would let us know. And I'd check in with her periodically to see how she was doing. I think it served to motivate me in the offseason, to be even more prepared and stay on it because I didn't know how much load I was going to have to carry this year. Knock on wood, I feel healthier than I ever have.

How do you stay focused when all your plans take a detour?

It's hard. Because you're getting challenged. Every time I am in a situation like that, I try to channel all my energy toward what positive can come out of this. I immediately start looking for the lessons I can learn. I look for opportunities to grow and get better. I feel there's always a silver lining. Stay in the present and be mindful of what you can do right now to make yourself or your future situation better.

Another thing I subscribe to -- and it's really a hard concept for some people -- is the idea of detachment. You can want something really, really badly and be really motivated and determined to get it, but you can't hang on too tight because it can create problems. So the idea of creating detachment, even from the stuff you want so bad, is healthy. It allows you to take a step back and keep things in perspective.