"Biles, 17, is the younger sister of Simone Biles. Adria, a former gymnast, trained alongside Simone until the beginning of 2016." 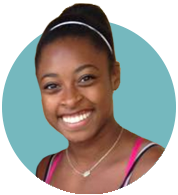 My sister has always been fearless.

When we were little kids, we'd stand on a railing on the second floor of our house, then jump off onto the couch down below on the first floor. She'd go first, and I'd follow. We were both gymnasts, so we were always trying things around the house. Nothing scared her.

In the gym, we'd often train together, and sometimes, when it came to trying a new move, she'd joke that she was going to die. It's something all gymnasts joke about -- the fear is real.

But most of us don't go and do it perfectly then! Simone was always able to go for it. If she felt fear, she never showed it.

There were hard days in the gym leading up to the Rio Olympics. Sometimes she'd get so frustrated with herself, and there were days when she'd cry because it was so hard. It wasn't easy at all. That didn't stop her, though, and she never gave up. That's something I'll always remember.

Everyone expected Simone to win in Rio. She told me once that she did feel the pressure, and that it was more pressure than she'd ever felt before. She said the expectations were hard -- and she didn't want to disappoint anyone. But she also told me that she knew she was ready.

When we got to Brazil, I was so nervous for her, more nervous than I've ever been. I almost couldn't watch. The best night was when she won the all-around. She finally did it, and I couldn't control my emotions. We didn't get to talk to her right after, but I could see how happy she was. We were all cheering and crying and jumping up and down when she won. I just couldn't stop crying.

It's been funny to watch her go from normal Simone to famous Simone. Even in Brazil, people came up to me every day thinking I was her. They'd ask for autographs and take pictures. And many times they didn't speak English so I couldn't explain that I wasn't her. They'd just say, "Simone! Simone!" and finally I decided it was easier to just let them take a picture.

We do look alike, I'll give them that. But I'm about 5-foot-2. Simone is 4-foot-8. I'm a good head taller than her. When we are side by side, people can definitely tell us apart.

Since Rio, it's been crazy. We can't go anywhere without Simone being recognized. We'll run into the supermarket to get onions and someone will say, "Hey! That's Simone Biles!" Sometimes I want to just go to the store and grab a few things without people coming up to us, but she deserves it too. She's worked so hard. And now every time we go out, someone wants a photo with her.

We've always had a lot of fun together. If I could do anything in the world with her, right now, we'd go ice skating. We've always been so busy that we just haven't had time. This year, we're doing it.

Simone is as outgoing as she seems, and yes, she is always laughing. She's also kind and humble, and I'm so proud to have her as my sister. I look up to her in every way.

• The difficulty of being Simone Biles Story »