Before Katharine "Kat" Holmes performed a fencing demonstration at the 100 Days Countdown to Rio event in New York City, she pulled some inspiration from an unusual source: The song "I'll Make a Man Out of You," from the Disney animated film, "Mulan."

"When I was practicing with the Princeton fencing team that was one of our songs that we would use to get pumped up. It's on my workout loop and it came up this morning, and so I was like, 'Yup, this is what I'm listening to today,'" laughed the two-time Princeton All-American and three-time Pan American Team champion.

"I tend to listen to just one song on repeat. It's not necessarily the same song for every competition. I'll listen to a bunch of different stuff that morning, and one song will resonate and I'll just go with it the whole day."

As for her go-to song for Rio, where she will make her Olympic debut, the Washington, D.C.-native says it could be anything, including one of the five songs she has already linked to the Brazilian city.

"I've been to Rio five times now for different tournaments, so that means I have five different songs that I associate with it. But it's really whatever strikes a cord in the morning. I have a massive library of thousands of thousands of songs to choose from," she said, sharing this brief snippet of her collection with us. 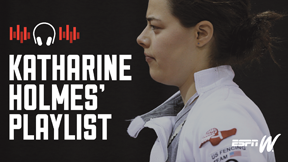