The titles on Lindsey Vonn's comeback playlist read like a personal power chant -- and they appear to be working their magic. The skier missed nearly a year of racing after fracturing her left knee in a crash last March and breaking her right arm in November.

Vonn finished 13th in an Austrian downhill -- her first race back from injury, with nearly zero training -- and then followed that with a victory on the tough course in Garmisch-Partenkirchen, Germany, at the end of January. The triumph marked her 77th on the World Cup, and it edged her ever closer to Ingemar Stenmark's all-time record of 86.

Now she's back racing, even with nerve damage in her hand that makes it difficult to grip her pole.

This week, the 32-year-old ripper will aim for more success at the world championships in St. Moritz, Switzerland, where she will lean on Jeezy, LL Cool J and others on this playlist: 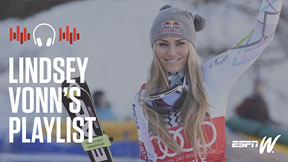