Natasha Hastings owns two Olympic gold medals in the women's 4x400-meter relay -- one from the 2008 Beijing Games, and one from Rio last summer. This month, she added another gold medal at the IAAF World Championships in London.

When she runs, she's smooth and collected -- in contrast to her playlist, which she says is "a little all over the place."

"I'm half Jamaican and Trinidadian," she explained, "so the reggae vibes [last] summer were a hit for me. I especially like Machel Montano's 'Better Than Them.' It's kind of a women's anthem -- just the right tune to get ready to compete.

"I became a Belieber last fall, and just love his music," she added.

But DJ Esco's "Too Much Sauce" is a different breed. "It definitely turns the swag all the way up and gets me pumped to get after it." 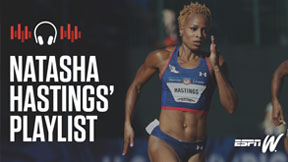